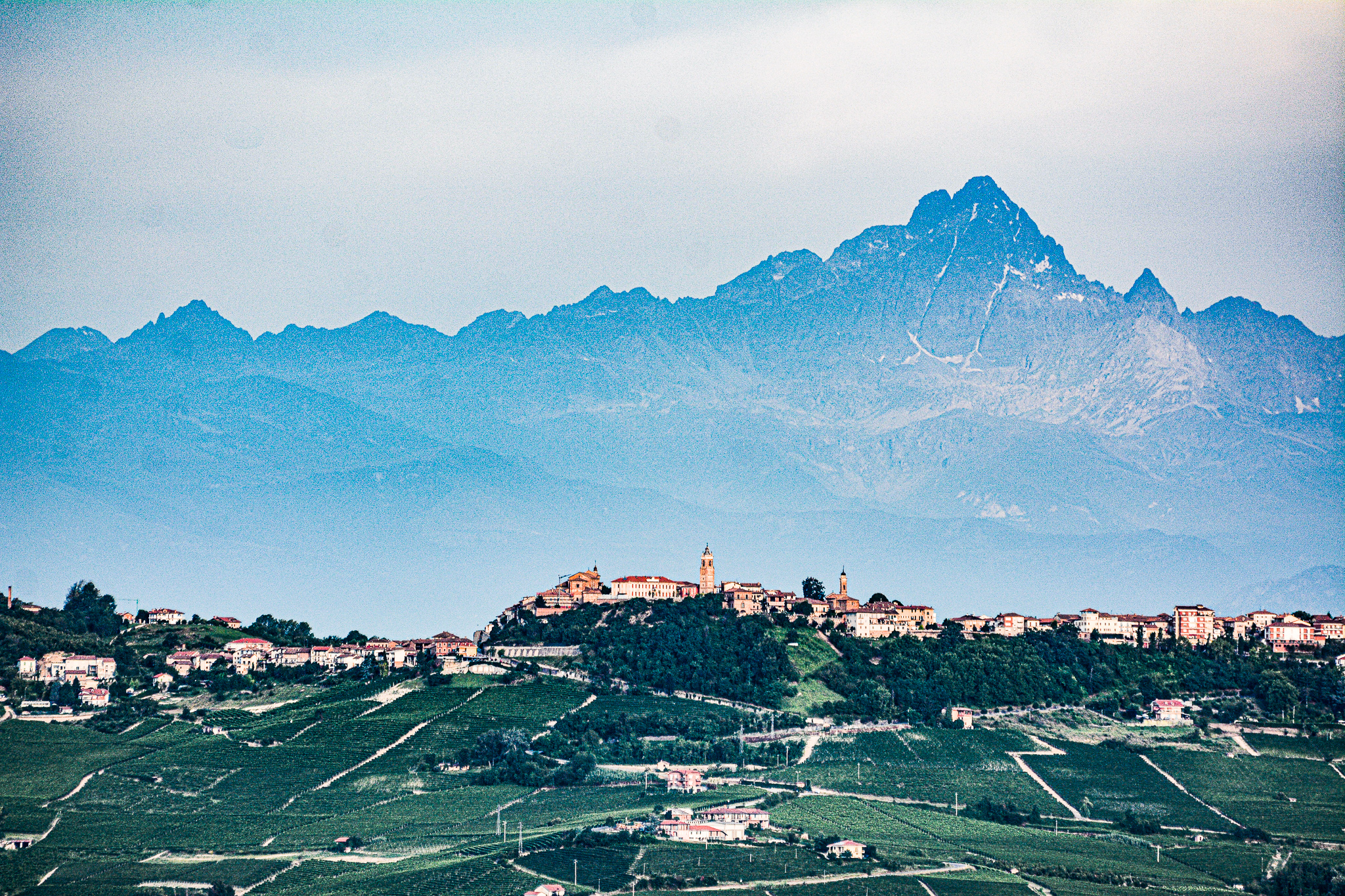 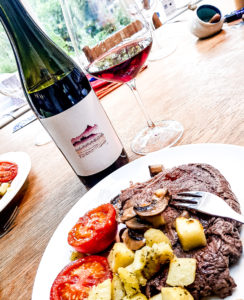 Here’s possibly one to drink…

Since my last blog post – improbably over a month ago now – I have finally managed to establish Byrne Vini.  This is my acorn-sized wine-making project.  In fact, we bottled 600 bottles (plus a few extras for tasting samples and possibly one or two to drink) in late January, but there was an unforeseen holdup in setting up the company around early March…

It was far from the most serious issue raised by Coronavirus, but it was frustrating nonetheless: even if I had had a client who wanted to buy the entire pallet, I couldn’t sell it to them!

Anyway, on 20th July 2020, Byrne Vini officially came into being.

I will do a separate blog post about Byrne Vini, so that’s your lot for now – this was just to pique your interest…In the meantime, compare the main photo with Iain’s lovely label above…As always, stuff in yellow is a link.

What I’ve been up to… 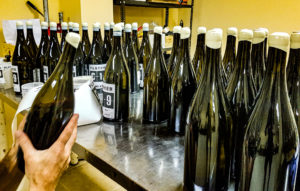 Hope I’m not giving away the name of the producer – he sells out already…!

Following a week in the UK with Noah visiting family, I spent 13th and half of 14th August labelling some wine at a friend’s cantina.  It was great to get back into a winery – it was the first time I had done anything like that for over 5 years…All his wines are great and worth looking out for, but – and I don’t wish to offend him by, relatively-speaking, ‘damning’ his other wines, which are, as I have already said, very good – his Chardonnay is simply amazing.  I have already told too many people about it (to the point where I can’t get any myself) so I will leave it there…

I will be doing some work in a couple of wineries over the harvest – anything from 4 weeks to 2 months I imagine.  I will probably be out in the vineyards quite a bit, which I have some experience of, though most of my experience is in the cantina: vineyard work is hard and I am slow.  At least, I was slow – and that was when I was much younger and hadn’t had my back broken…A former boss of mine was of the opinion that you should treat vineyard workers like animals (he actually said that) otherwise they will get ideas above their station.  Having done some winter pruning in 2 feet of snow, vine-training in July heat and picking 20kg crate after 20kg crate during harvest, I am of precisely the opposite opinion: vineyard work is the hardest as well as the most important work for a wine producer, and we are lucky to have many people coming to do this work so that we don’t have to.  Hats off to all vineyard workers around the world – thank you!

I’m looking forward to it, but also have some trepidation.  After doing no more than labelling for a couple of days, I could feel my right hamstring…

I won’t go into the situation around Italy – I expect we’ve all had enough of that – but I will touch on the situation for growers and producers here.  I heard on the grapevine here (sorry) that the consorzio for Barolo, Barbaresco, Alba, Langhe & Dogliani (keep it simple…) held a meeting to discuss possible aid packages for producers in light of the economic challenges presented by Covid-19.  A number of different proposals were made – payment to leave fruit unpicked; payment to send excess wine for distillation; payment for purchase of extra tanks for storage capacity (unbottled wine still in tank would be taking up space in wineries, resulting in lack of space for the vintage this year); making one giant wine from everyone’s excess production (previous, unbottled vintages, or 2020 – or both?) with it all going in together and being released at a cheap price to supermarkets.

In the end, they didn’t vote on anything, but just asked for there to be some fund established for buying extra equipment.  I must emphasise that I heard this from a friend here who is not a member the consorzio and consequently was not at any meetings, so I am not sure how accurate this is.  I have asked the consorzio for any information they can give me but I have not had a reply yet – I expect that today (24th August) is the first day back from their summer holiday…

One producer I spoke to had received a contribution from the Italian government of 15% on the difference in turnover between May 2019 and May 2020.  For the harvest, there is compensation on offer to growers to reduce their yields.  The Italian state is offering a maximum contribution of €500.00/hectare (2.47 acres) for I.G.-, €800.00/hectare for D.O.C.- and €1,100.00/hectare for D.O.C.G.-approved vineyards, based on the number of hectares under vine for the 2019/2020 harvest.  It is not clear to me whether this is simply to reduce the yield by up to 15%, or to leave all the fruit unpicked (given the sums involved, I would hope it is simply to reduce the yield).

The region of Piemonte is offering support for the emergency distillation of excess wine in an attempt to avoid over-supply in the market, or at least mitigate its effects.  The total fund is €4 million, which will probably not go far among the thousands of producers here, but it is much better than nothing, of course.

For the harvest itself, a shortage of pickers looms: most here are from Eastern Europe and are now required to quarantine upon arrival in Italy.  At least one producer I spoke to has gone through humanitarian organisations to offer work to refugees and asylum-seekers.  Most producers are getting people wherever they can.

The sales situation is also serious: I spoke to one producer who said that, though the market had picked up in June and July, they were still 32% down on 2019’s turnover.  With the probability of a second wave, they expect the autumn and winter to be even tougher.  The prices of bulk wines have also tumbled – down up to 80% compared to pre-Covid-19 levels.

How is 2020 looking for the vineyards?

Here there is better news.  So far, for the vineyards at least, the summer has been a good one here.  We have not hit the peaks in temperature that we had last year and we have had respite overnight: last year we had a number of weeks where the temperature remained over 30°C continuously, hitting the low 40s in the day.  On one occasion in 2019, I met some people in Castiglione Falletto at 7.30pm and it was 38°C and humid.  I wanted to walk through the pool and then sit in my wet clothes in front of a fan.

This year hasn’t been as extreme, but there has been regular rainfall, so the humidity has been kept high.  Disease pressures have not been too bad, though.

We will be picking early again this year (at what point do these earlier harvests become the ‘normal’ picking dates…?) but, as in some years passed, the whole year has been early – we didn’t have a late or normal start to the season and then very rapid growth and ripening: we started early after a warm winter.

The growers and producers I have spoken to are happy so far with the growing season.  We just need two more good months.  It would be great if 2020 gave us a wonderful end to the year…

We also need the aforementioned people working in the vineyards and wineries – hence my being able to do so this year: as mentioned above, there has been considerably less movement of people within the EU this year. 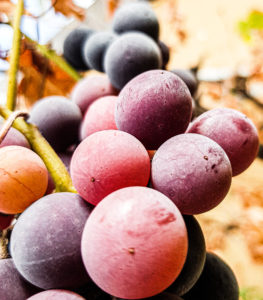 Grapes ripening on my terrace – they might look good, but they smell and taste awful…

I have been keeping an eye on the grapes on the terrace here, tasting them as they have ripened, and each time I wish I hadn’t.  I’m not sure what the varieties are, but they are not vitis vinifera, and they have a decidedly unpleasant ‘gummy’ smell and taste.  I think they’re horrible.  I like the leaf canopy, though.  But even that fell largely by the wayside from two of them (the two black varieties) while I was visiting family in Britain during the hottest, driest period we have had this summer.

15th August is Ferragosto: the big summer holiday in Italy.  Alba is usually empty of locals in the week prior to Ferragosto and the week following, with many of the shops being closed, to the bemusement of all the tourists in town on their summer holidays.  This year shops and restaurants remained open and there were plenty of people in the town and surrounding areas.  The demographic was inverted, however.  There were hardly any visitors here, while the Albese might not have been in the office but they forewent the trip to the coast this year.  It seems like a ‘normal’ month – in itself quite a nice thing.

We’ll see how things go in Italy in early September, once everyone who has been to the crowded beaches has gone back to work and infected everyone there, and their kids have infected their classmates…Here’s hoping that ‘Tutto Andrà Bene!’