A contrast in tastings

During the past week or so we have enjoyed 3 completely different tastings, from the small family-run, to the historical, to the “rockstar” newcomer. In their own ways all with unique styles and emphasis and  in particular wines we enjoy drinking. 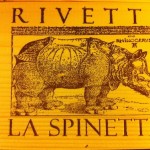 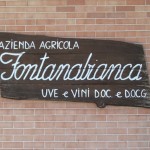 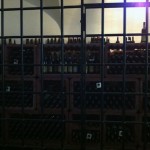 A small family run vineyard run by Aldo Pola and Bruno Ferro that produces only 50,000 bottles a year but nevertheless has collected several tre bichierri awards from Gambero Rosso for its Barbaresco. The Sorì Burdin is the flagship (’98, 01,04’05)with the vineyard nestling beneath the Cantina and a spectacular view of Neive as the backdrop. In 2006 the Serraboella was the 3 glass award winner. This is classic, elegant, luscious red fruit Nebbiolo with minimal chemical intervention and consumer-friendly prices. The fresh Langhe Arneis is also high on our list of favourites as is the Langhe Nebbiolo and Barbera Brunet. We continued to enjoy the opened Barbaresco with dinner at home.

Wine has been produced in the castle since the mid 19th century and in 1857 the first exportable nebbiolo wine, called “Neive” won a gold medal in London. A tour of the cellars that sit beneath the cobbled streets of Neive Alto with Claudio Roggero, the oenologist was a fabulous and unforgettable experience. One vaulted part of was only discovered quite recently when the old concrete vats were removed revealing at one end, the rock strata going back millions of years. They produce 150,000 bottles a year encompassing a comprehensive range from Moscato d’Asti, Spumante to Dolcetto, Barbaresco. We tried 3 wines with the charming Italo Stupino, the first of which was an Albarossa that is a hybrid of Barbera and Nebbiolo and packs a real punch of oaky fruit. 11am was probably not the best time to taste it but it woke up the taste buds and we will enjoy it in the future with a hearty dinner. The Barbaresco San Stefano 2007 was elegance personified and will improve with age although 2007 is an excellent vintage it’s generally not turning out to be my favourite. I prefer the more muscular, tannic 2006s but I then I like my taste buds being assaulted. The Barbera d’Alba Mattarello 07 was another solid example of the Piemontese winemaking art. Italo also very kindly provided some of their 2008 Riesling for us to enjoy later with dinner which provided a tasty yet understated change and much preferred to the plethora of stylised New World offerings. Solid wine, decent prices and a memorable visit

It is amazing what has been achieved by the Rivetti family in just 20 years and we found ourselves almost overawed with the wines and the recently (2000) constructed vaulted cantina; the design  of which has a timeless quality.We were welcomed by both Georgio and his niece Manuela, who guided us through the wines and Giovanni a local lad who gave us the tour. The annual production is around 600,000 bottles of which a third are produced in Toscana (Tuscany): we have tried and enjoyed the Casanova Sangiovese in the past and the Vermentino at our local Socio. The latter was first produced in 2009 in 34k and sold out very quickly so we will be pre-ordering the 2010. Of the remaining 400k, 200k are Moscato d’Asti (not too sweet) and 100k, the new vine Barbera Cà di Pian (excellent and decently priced). The Barbaresco Valeirano 2006 and the Barolo Vursò 2005 (a lion label rather than the traditional Rhino symbolising the king of wines, wine of kings) were the best we have tasted. Despite the hefty price the best of Piemonte still costs a fraction of Bordeaux and is in the  must-have category. Similarly impressive, but more affordable was the Barbera Bionzo that spends 16-18 months in new oak and comes from the old vines that are,  as Manuela put it, thoughtful, producing fewer but more concentrated grapes as they age. The Monferrato Rosso Pin, (Grandpa’s nickname), made since 2003 with 65% Barbaresco and 35% Barbera Bionzo,  combines the best to provide  less aggressive Barbera tannins with a Nebbiolo nose.