A tip from the UK (Scarzello)

I am very fortunate that my passion for Piemonte wines is contagious and last week my son’s mate Rob (aka as Poshington)went along to a tasting organised by Decanter magazine in London. Among the wines he particularly enjoyed were a couple of names that I didn’t know so a quick phone call and we set off to Barolo to meet equally passionate Federico Scarzello (Scarzello Giorgio & figli – Azienda Agricola).Scarzello is a small, family cantina in the centre of Barolo that focuses on just 2 grapes; Nebbiolo and Barbera (they stopped making Dolcetto 2 years ago). The Barbera has evolved over the past 20 years driven by Federico’s persistence against his father’s reluctance to grow a “wild” grape that doesn’t have the  same resistance to “muffa” (mildew) that Nebbiolo has. As Federico puts it, “muffa” can run faster than the Barbera harvest. After more than 10 years of experimentation they now produce a terrific Barbera d’Alba D.O.C. and the 2006 Superiore is an excellent example. Around 5k bottles of dry , full bodied, elegant, intensely perfumed wine that has spent 16 -18 months in oak and then a further 6 months in the bottle. You can buy lots of cheaper Barbera but €12.50 is not expensive for such a good wine.

Federico’s determination to keep experimenting to improve quality is close to a cult in Piemonte among the younger generation. No matter how much you study and learn there is always something new. You can know everything about a particular aspect of viniculture but never everything. One of Federico’s friends likens it to going into a dark room with a torch: you can direct the beam at a corner and know everything about that corner but the rest of the room is still a mystery. This focus on perfection meant that in 2002 and 2003 no Barolo was produced and consequently the 2005 Barolo Vigna Mirenda was released a little earlier than usual. The wine critics don’t particularly rate the 2005 vintage but here was a wine that has balance and elegance over strength/ potency (Federico’s motto!) with a persistent herbal nose, almost minty, that leads you on. Characteristically dry and long, yet with underlying fruit that the tannins will yield to.  Bought in magnums (€60) for slower ageing and less temptation, but €30 is good value for such a classic Barolo, equally the Barolo DOCG  at €25. If you are looking for something more approachable for everyday drinking then the Langhe Nebbiolo 2007 is a good example, and under €10 to boot. Further confirmation, if it were needed, of the generally high quality of wines that are produced in the region at all levels. 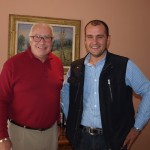