For the past week we have been enjoying the company of some old friends Steve (aka “Raucus”) and his long suffering wife Moya, who were determined to leave with a carload of wine. We have visited, tasted and bought wine from Sarotto, Ressia, Saria, La Ganghija, Voghera, Produttori del Barbaresco and Lodali and seen them off with enough drinking until next year’s visit, possibly. 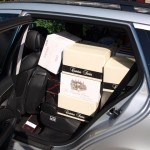 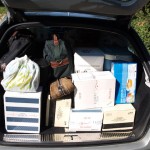 The effect of so much wine and food was inevitable or, as Stevio so evocatively put it, it was “like sleeping with a tuba”!

I have recently written about Roberto Sarotto and Ressia where there was as always a warm  welcome .  The pick of the other wines tasted (and purchased) over the week included:

2009 Chardonnay (€5) left for 24 hours with the skins for 24 hours prior to a slow fermentation of 2-3 weeks at around 15°to accentuate the floral nose and a pleasing minerality. 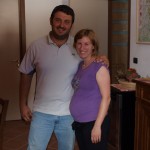 2008 Barbera(€6) made from 50-55 year old vines that produce more consistent results. A year in barrique and low tannins have produced a wine that is quite closed and needs a few minutes in the glass to share its delights.

2007 Barbaresco(€16), the 2006 produced a bronze medal in the Decanter Annual International Wine Awards.

Congratulations Enzo, also on the impending arrival of Edoardo at the end of the year. 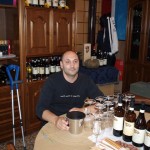 Always experimenting, always looking to improve quality, his 2006 Canova Barbaresco (€22)was rewarded with the top 3 glass award by Gambero Rosso and his creamy 2007 should also win an award. Unfortunately Fabrizio was on crutches having broken his leg coming off his motorcycle last month. He was another victim of Italy’s holiday closure finding Alba hospital closed and having to wait 4 days for an operation in Bra! Not the best time to be incapacitated but he won’t have lost his voice in the vineyard. 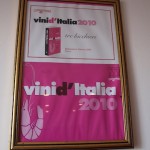 Pride of place for Barbaresco Canova 2006

Favorita 2009 (€5) was a revelation with 2 separate bottlings. As well as a very fresh offering aged as usual in stainless steel  he has also made a wine with real structure by putting around 30% in accacia for a couple of months, a stunning result.

Similarly the Evien 2009 (€8.50), a dry Moscato  unusual for the area, also has around 30% matured in Accacia but for 6-9 months for structure. It is also fermented at low temperatures for perfume, 16h at 8°, 36h at 2° and then 45 days at 12-14°. The result is fantastic and the unmistakeable Moscato nose grows in the glass. Opened well in advance or simply left for a while in the glass , it retains its potency and character and can be drunk after a full-bodied red and not be overshadowed.

Barbera Canova 2008 (€8.50) has surprising structure considering it has only seen stainless steel.

Barbera 2008 Superiore (€10) on the other hand has spent 22 months in Botticelli made of French oak bodies (for elegance) and Slavonian Oak top and bottom (for structure). It works.

A new wine (or medicine) has been been added to their offerings the Alchemia 2008 which is an assemblagio of 50% Nebbiolo and 50% petit Verdot. A dark, brooding wine destined for long life. Only 1,250 bottles were produced and sold out in a week. Fortunately there were a few magnums left at €45 and 2 have found their way downstairs. 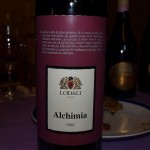 As usual the Chardonnay (€5), Langhe Nebbiolo (7.50) and Barbera (€5) were all up to the mark and we particularly liked the Roche dei 7 fratelli, Barbaresco, and Barbera Lorens, named after his father (both €15). 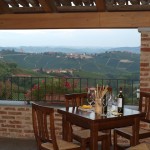 Carlin Carlota- view from the terrace

Stevio particularly liked their wine, Arneis, Barbera barrique and Langhe Nebbiolo. Inevitably when the car was being packed on Saturday afternoon there was a little space still available so after I had made a quick telephone call at 3.30pm we were soon sat in the Cantina’s kitchen tasting their wine. All 3 of these wines joined Stevio’s growing inventory (€4.40, €6.50 & €5.70 respectively) and I couldn’t resist the magnums of 2005 Barbaresco at €17. So that was that, until, I mentioned how much I liked Produttori di Barbaresco Nebbiolo, so we had to drive home via Barbaresco for another quick tasting. I already have their wine downstairs so my money stayed in my pocket until, I noticed crystallino Riedel glasses at just €5 each. The rest is history and I am now saving up for their next visit. 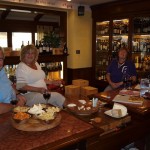 Raucus, Moya and Her Outdoors at the bar in Torres