Across the river and into the Roero

Like other rivers that form a barrier between communities, the Tanaro separates Barbaresco from the Roero and sometimes we, on “the posh side”, sometimes overlook our neighbour’s wine. Last week we ventured across the Tanaro and visited Canale  and two of Roero’s finest, Malvirà and Deltetto.

The morning saw us joining a very friendly group of  restauranteurs from Milano at Malvirà where we toured the cellars and tasted most of their wines under the expert guidance of Roberto Damonte, the winemaker. 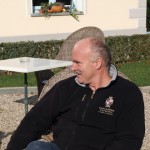 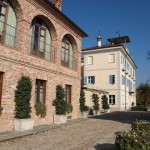 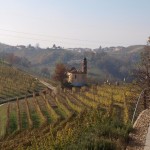 We were already well acquainted with the Langhe Favorita, the Roero Arneis and Trinità Arneis that are among our favourite whites at La Torre del Monastero in Neive. What was new to us were the  Renesio Arneis 2009 and the Saglietto Arneis that have now earned a place in our cellar. The Renessio is an historic cru, from which the name Arneis derives, and to our taste had  better length and structure than our Torre favourites. Roberto thinks that this is a wine that can age and become more interesting after 4-5 years. Similarly the Saglietto, where 50% of the fermentation takes place in French oak and it is also aged for 10 months in oak. This gives it more structure but it is also subtle and complex. The Langhe Bianco (or Sauvignon Blanc) 2006 had an intense tropical fruit/pineapple nose that also transferred to the mouth and there is no hurry to drink up. The Treuve 2004 (40% Chardonnay, 40% Sauvignon Blanc & 20% Arneis) was a revelation not least because of it’s age; length, elegance and an intensity that could compliment quite strong flavours. The reds were all good and showed that the wines from Barbaresco and Barolo don’t have it all their own way. From the straightforward, fruity Barbera d’Alba S. Michele 2006 (18months in oak), the more powerful S.Michele Superiore from older vines and 2 years in oak, the Nebbiolo Mombeltramo 2003 & 5 to our favourite the Riserva Renesio 2005. Matured in French Oak for a couple of years and then the same in the bottle producing a tannic , spicy, yet fruity wine. Above the Cantina lies the Trinità vineyard (named after the small church that sits there) and on the ridge sits Villa Tiboldi which would be an excellent choice as a base for touring the area with spectacular views, comfortable rooms and an excellent restaurant even if the wrong side of the river! 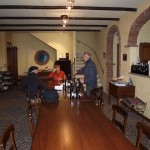 Antonio with Her Outdoors and Bobtino (hat indoors?!) 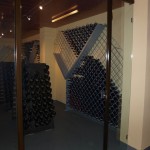 Just around the corner we met up with Antonio Deltetto, another star of the area, and his son Carlo who like the Damontes make excellent whites including Brut. Antonio left school in 1977 and the following year made a little Favorita in defiance of his father Carlo who believed that it was the worst grape in Italy and that real men only drink red. Thankfully he has proved his Dad wrong and the result today, Favorita Sarvaj (“wild”), named after the Roero hills, is superbly fresh and citrusy. The Arneis Daivej, with a fresh yet creamy elegance and the Arneis S. Michele that is 30% aged in oak for 6 months, are both lovely and are wines that can be drunk early or take a little age. Their bollencine (bubbles) started as a hobby in 2000 and are now among the best. We happily recommend the complex Spumante Extra Brut Riserva (60% Pinot Noir/40% Chardonnay), Spumante Brut (50/50), planted on north facing slopes to preserve acidity, and the well balanced Spumante Extra Brut Rosé (50% Nebbiolo/50%Pinot Nero) as excellent alternatives to Champagne. The reds were equally excellent. The 2007 Rocca delle Marasche Barbera d’Asti was extremely elegant with hints of violets but to us the star of the show was the 2007 Roero Braja  which showed off the best of Nebbiolo and is a serious challenger to the best of the “posh side”: oodles of fruit, elegant tannins, complex structure and happily available in magnums. A tour of the cellar was also a treat, particularly the newly constructed library with its racks designed and constructed from the mesh used to reinforce concrete and Antonio’s  art.