After another  relatively average tasting at La Morrra on Saturday I left not realising that I had missed one of the stands. 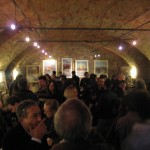 Not surprising, as it was a Bank Holiday weekend and the weather was lousy and consequently it was jam-packed.

Fortunately Bobtino didn’t miss anything as he drinks much quicker than me and I was driving. So yesterday with the rain still falling he had made an appointment and invited me to join him and Swell (his Lesley) for a tasting at Az. Ag. Cravanzola Franca (Alessandro’s mother). 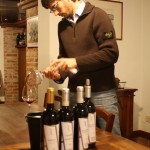 Alessandro is another of the young generation of Piemonte winemakers who has very clear views about the kind of wine he wants to produce. As he puts it, he wants to make approachable wines that can be enjoyed on release, and not heavily wooded body-builders that need long cellaring to reach their best. The most important decision for him is to match the grapes with the wood and not simply be one side or the other of the Botte Grande/Barrique argument: the grapes should always lead. It’s quite difficult to assess or argue with his progress against this objective as he only began making wine in 2005, but what we tasted  was excellent.

He has wise counsel on tap from his uncle Mauro Veglio, but he is honest that he can’t work with anyone else in the Cantina. For this reason production will be capped at around 30-35k bottles a year which he feels is within his solo capability.

Current production is a little over 20k but the refurbished cantina, finished in 2008, will comfortably accommodate the increase.

Dolcetto 2008 €6– Unlike most foreign visitors to the cantina, (who suspect it is sweet), we tasted the Dolcetto. I was surprised at how structured it seemed and it had a woodiness to it despite only having seen stainless steel. The 4o+ year old vines have since been pulled and replaced with Nebbiolo and Barbera that Alessandro feels are better suited to the locale. Future Dolcetto production will be from a recently purchased vineyard in Roddino which he feels is better suited. I am not usually a Dolcetto fan but this was very good and it will interesting to taste future offerings. I can’t believe I’ve devoted so much space to a Dolcetto!

Barbera 2008 €7.50- Not the best year for Barbera as June/July was relatively cold. Nice fruit but not too long nor structured but a  decent accompaniment to any meal

Langhe Nebbiolo 2008 €10- From vineyards above Canale and 10 months in barrique: this was seriously good wine. Fine, elegant and a delightful sweet fruit nose. Classic Nebbiolo at its best.

Barolo 2006 €25- True to his philosophy this is a Barolo that can be enjoyed now and hopefully for many years to come. The grapes do all the talking and the wood merely plays a supporting role. Elegant, balanced and well priced for Barolo. I’m glad I didn’t have to wait.

The property also boasts a very comfortable Agriturismo (Risveglio in Langa) which we also toured and the position is quiet and perfect for touring the area. A double room including breakfast is priced at a reasonable €100.