And now for something completely different, Erbaluce di Caluso

It is so easy to become totally immersed in the world of Barbaresco and Barolo that one becomes blind to some of the delights just down the road: actually in the case of Caluso an 1 1/2 drive from Neive to the north of Torino. The ancient Erbaluce grape, whose name probably derives from Alba (dawn) Luce (light) has a copperish colour as it matures and is more or less confined to this corner of Piemonte centred on Caluso. It produces wine of  excellent acidity with an aroma of apples and grassy meadows and lends itself well to both still, spumante and passito. As Remo Falconieri of Cieck explains its production has had to adapt in recent years to compete with the growing popularity of other Piemontese wines like Arneis and Favorita. Originally all the wine from the area found its way to Turin and Aosta but during the past century improvements in the road system and other travel meant that it became easier to buy wine from farther afield. Wine that was traditionally sold “sfuso” (on tap) is now bottled and marketed more widely. Indeed Cieck only started bottling their wines in 1985 and now produce about 80k bottles and export to several overseas markets including the USA and Japan.

This small family run business makes a range of wines with the most important coming from the erbaluce vines that are trained on a pergola system (“pergola canavesana”):

San Giorgio, Erbaluce di Caluso Spumante – “metodo classico” with 3 years on the lees before final disgorgement and then 6 months further in bottle. Good every day bubbles at €11. There is also a fruity Rose Brut that has only been on sale for 2 years at the same price

Calliope Brut 2006, Erbaluce di Caluso Spumante – “metodo classico” with 40% barrel fermented before blending with Erbaluce wine and a further 10 months barrel ageing before bottling and a further 3 years on the lees. A step up that produces a yeasty yet beautifully balanced acidity. Good fruit and decent price €13

Misobolo, Erbaluce di Caluso DOC 2010 – Single cru, hand-picked and selected in the vineyard. Fermented in stainless steel. The bubble gum nose draws you in. Beautiful soft acidity and reminiscent of nougat and nuts. Lovely at just €6.80

“T” Erbaluce di Caluso DOC 2009 (€8.50)- the vines are covered in netting  from August to protect the fruit and permitting a later harvest. This classy wine is altogether more serious with intense pineapple, tropical fruits. A more restrained nose but a smooth long finish. I loved it.

Alladium passito – after harvest in September the grapes are hung in a ventilated room until March when they are de-stemmed and crushed in a small wooden crusher and then decanted into small oak barrels for 3 years before bottling. Golden, unctuous honey and rich fruits. Not too sweet and would be great with soft cheeses as well as desserts. Decadence for €16.50.

The reds, produced in small quantities were interestingly different from what we are used to:

Cieck Rosso 2008 (€6.00) – a blend of Barbera, Nebbiolo and the local Nerreto was herby, with violets and  easy to drink but no great length.

At Remo’s recommendation we had a leisurely lunch at the welcoming Residenza del Lago in Candia of course washed down with Cieck Misobolo Erbaluce despite the extensive wine list. Everything was home-made from the 3 types of bread, to the Tajarin pasta with a rabbit and sweet pepper sauce and roast ham with a honey and mustard sauce served with braised spinach and roast potatoes. Reasonably priced. 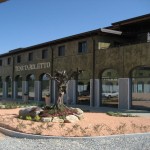 The new cantina at Tenuta Roletto

The afternoon presented a complete contrast at the ultra-modern Tenuta Roletto whose new cantina was opened in 2008 with the offices and massive custom made drying-room above , following in 2010. The drying-room has capacity for 38,000 bunches! The Estate stretches over 21 hectares producing over 100k bottles. They are constantly experimenting and have ongoing projects in conjunction with the University of Turin e.g. comparing pergola grown vines with wire trained ones. We loved their Muliné Erbaluce 2008 which spends 12 months on the lees to lower the perception of acidity. It had a nose of dried apricots and was similar to very well rounded white Rioja. The 2007 was more citrus but creamy with a flavour reminiscent of aged champagne. They will continue to evolve. We would have bought some but they had sold out so we will keep our eyes open in restaurants. The available 2009 was lower in alcohol (12.5°) and unlikely to improve much but nonetheless not a bad introduction at €8. Their entry level Erbaluce 2010 and Canavese Rosato (at around  €5) are good everyday wines and their first Spumante (2008) will be worth looking out for when it’s released. We did manage to purchase a few bottles of their fruity Canavese Barbera that had been barrique aged for 6 months. Nicely woody and an interesting alternative to the rather heavier Langhe Barberas we are used to.