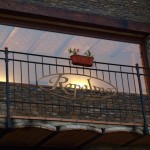 The tasting room from below

One of the joys of living in Neive is that all our neighbours produce the most wonderful wine. 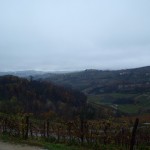 The view from Rapalino towards Neive and la casa nostra

A few days ago we introduced ourselves to yet another within 10 minutes from our house and next door to Sarotto.

It probably seems that we only ever seem to have positive things to say about our local wine but that is not surprising as we tend to visit only those producers whose wine we have already sampled at local restaurants, bars or at organised tastings.Claudio Rapalino is just such an example and if he produced bubbles (bollecine) you could do all your shopping in Ronconuovo, Neviglie. His lovely wife and commercial director, Lorenzo Pirra completed the welcoming committee. Claudio speaks very clear and understandable Italian unlike Lorenzo with whom he  only speaks Piemontese. He admitted that he can’t speak Italian with him and look him in the eye  without laughing. 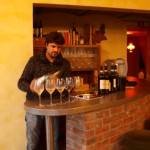 We had already been impressed with his Favorita and were keen to see what else he had on offer. His 3 whites are all good: “Conference” is 100% made from Moscato fermented at low temperature and the perfect aperitivo at just 12.5% alcohol; dry, light, fresh with good acidity. 2003 was the first year it was sold and interestingly, recent analysis by UC Davis found Claudio’s grapes to be the cleanest/purest among their samples. Unsurprising as he only adds what the vines need after analysis.The Favorita 2009 is a fine, elegant wine and the 8 months it spends in wood adds some unusual structure. Before WWII it was only ever a table grape. The Langhe (despite being from the left bank of the Tanaro) Arneis 2009 is also infinitely quaffable.

The Barbaresco Ferrere 2006 was lovely but it is relatively new having been bought in 1997 and planted in 1998. The Barbaresco Ca Grossà 2006 on the other hand, showed the benefit of older vines almost 60 years) and although still a little closed, had real power, structure and length. The yields are  controlled as Claudio only allowed 2 bunches on each already  reduced number of stems. Only he and his brother do the pruning which means real quality control. Apparently, once upon a time Neviglie was part of the Barbaresco Zone but the Mayor then declared “independence”. These days such action would demand the death penalty!The other reds were also worthy of consideration particularly a Freisa Vughima 2006 that is mainly sold to Swiss, Germans and Austrians. The Freisa grape along with its relation Nebbiolo is the oldest in Piedmont but not so common these days. It quite often produces frizzante wine with a sweet edge but this is altogether more serious, dry, powerful with red fruits underpinning. 18 months in small French oak barrels, 10 months in Slavonian botte grande and then 6 months each in stainless steel and bottle; Her Outdoors really liked it. The Steira Neira 2007 (Piemontese for “Black Star) is an assemblagio of Freisa, Barbera, Nebbiolo and Cabernet Sauvignon aimed at a more international market. The Nebbiolo “bricco macchia” was classic elegant, black fruit, structured nebbiolo and the Barbera Superiore 2007 was similarly a good example of the grape but after 2 years in tonneau of 500hl needed some time in the glass to open up. Claudio mentioned that he thought that the reduction in the DOC  minimum acidity levels in line with those of other grapes was wrong as Barbera is naturally more acidic. Last but not least was the Dolcetto (Piemontese for “small hill” not “sweet”) which joined my very select club of good Dolcettos.