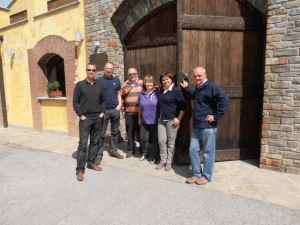 Bob Hamblyn (Bobsbuzz.com) had never visited Piemonte and seen the producers and their vineyards or even tasted their wines, that is until last month. His sons Gary and Ian are great fans and brought him over so that he could add something from the experience to his new winemaking venture in Eastbourne. 4 of our friends here made it a special occasion and deserve a special thank you for taking time to show Bob around. Fortunately he walked around with his mouth open in disbelief which made it easier to taste the wines! It has already had an immediate impact as he signed up for an bio-dynamics course immediately on his return to the UK. An afternoon with Claudio and Mariagrazia Icardi provided that impetus

The passion that Claudio exudes in the vineyard when he explains his knowledge of, and belief in biodynamics is contagious and the wine we tasted subsequently confirmed its worth. 10 hectares (sic) of their 75 is devoted to this philosophy and as you look over some of the surrounding vineyards it’s obvious which is theirs with herbs and even vegetables between the rows compared to barren chemically induced cleanliness. The Rudolph Steiner based philosophy is  holistic  and aims at combining the forces of nature to provide the  perfect growing environment rather than simply remedying problems organically as they occur.

The biodynamic Cascina San Lazzaro, Dadelio Bianco 2010 simply explodes with exotic fruits both in the nose and in the mouth. We were all taken aback.

The “Pafoj”, Monferrato Bianco 2010, an assemblagio of Sauvignon Blanc and Chardonnay, is so called (“not mad” in Piemontese) because its 50% SB is unusually oaked while the Chardonnay only sees stainless steel. A similar smack in the mouth of pineapple. Bob was buzzing and suddenly he was mentally expanding his modest Eastbourne project.

For me the “Nej” Langhe Rosso 2008, 100% Pinot Nero, is a more than a reasonable alternative to live-changing Nebbiolo and reasonably priced compared to expensive Borgogne. Another reason not to venture further north.

Mariagrazia is the perfect hostess who not surprisingly is responsible for their international sales success. Shame she couldn’t join us for dinner.

While I’m talking about international relationships, Evan Byrne at Giovanni Rosso, is also the perfect practitioner, (lock up your daughters!), and no need to translate as he has lost any hereditary  welsh accent.

The wines of Giovanni Rosso win many awards but we went there primarily to get out in the vineyards, appreciate the terroir and then we spent a little time tasting the latest vintages from the Botte. It was a chance to view how the area is split up into small parcels with some crus having many owners. On a beautifully clear day with the Alps in full view we visited Vigna Rionda, Cerretta and La Serra in Serrunga d’Alba all best described on the winery’s excellent website. In the cantina Bob spotted the perfect 300l stainless steel fermentation tanks for his production but the car wasn’t big enough to sneak away with them but now I know what he’s looking for: any ideas welcome as he needs 6. It was soon evident as we tasted the Cerretta and La Serra 2008, 9 & 10 vintages from the botte that we are still in an unbroken run of excellent vintages. Like Evan I could quite happily drink the 2008 now. What they all had in common was a structure and length that left loads of fruit in the mouth after the tannins subsided. In search of lunch afterwards in Castiglione Falletto we found that La Terrazza was closed despite il Padrone telling me a couple of days before that he would be open if the sun shined (it was beautiful). Le Torri was also closed so we reluctantly tried Locanda del Centro, between the two. I’m glad we did as the food was perfect along with a Cavallotto Langhe Nebbiolo.Apparently the chef used to cook at  the top Villa Tiboldi in Canale.

No less welcoming were Luca Cravanzola at Produttori del Barbaresco and Beppe &  Mauro Goazalino at Sciorio.

Luca is justifiably proud  of  the origins of this world class cooperative in which his grandfather was a leading light. Its origins and that of Barbaresco, as distinct from Barolo, go back to the end of the 19th century when Domizio Cavazza, headmaster of the Oenological School in Alba founded it along with 9 local vineyard owners. Fascism closed it in the 20’s until 1958 when the local priest revived the idea in the face of economic difficulties faced by local small growers. It has grown in the intervening 50 odd years from 19 to 56 members with more than 100 hectares under cultivation and production approaching 500,000 bottles. It only produces wine from the nebbiolo grape. Every member only sells his production to the cooperative and is paid according to the quality of his grapes that are instantly analysed on delivery. Payment is made in instalments and always complete by the start of the following harvest thus assuring the growers cash flow.

The wines, Langhe Nebbiolo, Barbaresco DOCG and in good years individual cru Barbarescos from one of 9 designated vineyards, can be tasted in the simple shop opposite the Antica Torre in the centre of the village. The shop sits above the impressive vinification cantina that is State of the Art which fortunately Luca showed us around. The ageing cantina just a km or so away is equally impressive with huge oak botti some of which hold up to 10,000 litres! The wine is pure, straightforward nebbiolo and excellent value with the Barbaresco at less than €20 and the Langhe Nebbiolo sub €10. Impossible to resist.

Last but not least yet another mention for Sciorio, for me the best quality value  wines outside the zone. Their  Sauvignon Blanc and Chardonnay at under €5 ex cantina is a steal and their range of  reds that include Barbera d’Asti, Barbera d’Asti Superiore (Beneficio), Monferrato Rosso-Syrah (Furmjia), Monferrato-Cabernet Sauvignon (Antico Vitigno) and assemblagio (Reginal) sell at the cantina for around €10. These are serious, fruity, complex, structured wines, and needless to say more than a few found new homes.

We are now having to think about building a Hamblyn guest wing onto the house.