Last week I had the privilege of tasting the wines of another young, up-and-coming producer in Barbaresco, Paolo Veglio of Cascina Roccalini. Tucked away off the back road from Neive to Alba, the cantina afforded us a splendid view of Barbaresco from an angle we had not previously seen; for once the external scaffolding and lift attached to the historic tower were not visible.The cantina itself, has parts dating back to Napoleonic times and its own personal chapel and has been in part lovingly restored. We tasted the wines in beautifully intimate surroundings accompanied by a plethora of snacks prepared by Paolo’s mama; beautiful light cheesey short crust bites, tuma with cugna, salami. We were expecting other visitors to arrive at any moment but they were all for us! 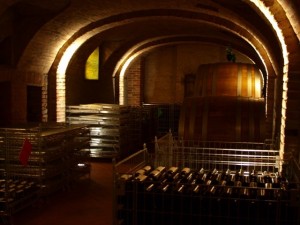 Paolo was brought up in the countryside and only ever wanted to make wine. He left Oenological college in 1998 and after a brief experience at Cinzano, started working in earnest on the family vines in 2003. Previously the family had always sold its grapes, latterly to Bruno Giacosa  where he came to the attention of winemaker Dante Scaglione who now provides invaluable advice. His first vintage was 2005.

His total production is only approximately 8k bottles with his Dolcetto representing less than 1k, but what a wine. This is not for everyday lunchtime drinking at 15°. It is a serious, powerful wine but still fresh tasting and just €6. His 2009 Barbera (€8.50) truly represents the terroir and is classic: straightforward, balanced with a nice length and a hint of spice. Not too much of anything except the grapes. The 2007 Superiore at €11 spent just 6 months in botte, which has added refinement but not overpowered the fruit which is unfortunately the modern way. I am not sure why I didn’t highlight his 2007 Barbaresco at the May tastings but the extra 8 months in bottle has made a huge difference and shows my palate for young wines has some way to go. €18 represents great value for such a well made nebbiolo and our first taste of the 2008 shows huge promise when the already smooth tannins begin to dissipate. Complimenti Paolo.