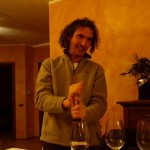 Gianni is an an excellent wine producer and with his good looks could have fronted a rock band although we didn’t ask him to sing. His wines certainly sing and are affordably priced. We were greeted by his bubbly sister Paola who is expecting a daughter in May and after a quick tour of the cantina which is in the process of renovation we settled ourselves in the comfortable tasting room. Wine is the family business and Gianni represents the latest generation. Castagnole delle Lanze is a stones throw away from Neive but is out of the Barbaresco zone; hence no Barbaresco nor nebbiolo. We began with his Grignolino d’Asti 2009. Love it or hate it, Grignolino can be a refreshing summer aperitivo and his priced at €3.80 and just 12.5° is worth trying. Fresh sherbet and not annoyingly frizzante like some. The Monferrato Dolcetto 2009 reminded me of wine gums and there was a pleasant sense of the sea in the nose. Soft fruity undertones and a snip at €3.80 for everyday drinking. The simple, smooth Barbera d’Asti 2009 (€3.60) is similarly not complex but smooth and much care has gone into the by-hand grape selection and pruning. Rather more interesting to us was the Barbera Bosco Donne 2009 as we regularly drink the 2008 at a local bar. Bottled in August 2010, but not yet labelled, at €5 this is fantastic value and the 2009 is a worthy successor and we prefer it. The Barbera d’Asti Superiore 2007 had spent 18months in used barrique which gave it a smooth oaky vanilla flavour and we could also taste figs and cugna, the local grape based chutney; fair value at €10. Top of the range was the 2007 Monferrato Rosso (€15) which is, unusually for the zone, 100% Merlot. It spent 24 months in barrique and has a fudge/caramel nose and nice length with citrus fruit hints. Last but not least was the 2010 Moscato d’Asti that had been bottled for just 2 months. Sweet but refreshing and bursting with tropical fruit flavours particularly pineapple. It is not surprising that Gianni wins many prizes for his Moscato and this will be no exception. 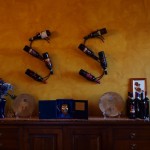