Recently we had the good fortune to enjoy the peerless hospitality of “Team La Spinetta” for an entire day. The occasion was the second Hands-on Day created for members of their Liter (sic) Club, a great international bunch, the origins of which are clear. One bottle of good wine for 2 people doesn’t quite do it and 2 bottles is perhaps a step too far.  A litre on the other hand is just about spot on. It was also an occasion to hear about their winemaking philosophy particularly in the vineyard where, according to Giorgio Rivetti and his sister  Giovanna, 90% of what constitutes a good wine occurs.

Moro and his assistant Giorgio

The day of treats began at the Campè Barolo winery in Grinzane Cavour with coffee while we surprisingly awaited the arrival of  some Germans, running late from their B&B on site, and some Swedes whose orienteering skills had taken them to the wrong cantina in Castagnole delle Lanze! Before it got too hot, we strolled to the vineyard and watched Giorgio ploughing along the vines behind their huge Belgian horse Moro. As they explained the earth needs to breathe and a horse is better than a tractor (which simply compacts it) and with the added advantage of providing manure. Nearly all the work in the vineyard is performed by hand and their pride in this was very evident. Machines, especially in the cantina, simply provide a means of avoiding mistakes and add very little to the finished product. Giovanna manages the work in the vineyards and she talked us through a typical year with translation into English and German by Anja (Giorgio’s partner). The most important time is February when the vines are cut to give direction for the year. In May as growth takes off there is a skilled process called  “scusulé”, which is the  trimming of excessive growth. Removing leaves below the grapes and leaving just 5 branches between the wire, not forgetting to leave a strong shoot from the rootstock for next year. Keeping the plants clean and aerated means little treatment and wide paths between reduces shadow as Nebbiolo can grow like a weed to 2m. July provides a further opportunity to control yields and another “green pruning” is carried out. Some producers delay  wanting to see how the weather turns out to protect yields but effective early pruning means better control and earlier harvesting (mid September) rather than the risk of running into unpredictable October weather. After harvest it’s time to wash the boxes used for gathering and again move the earth, dose with horse manure and plant new vines where necessary. Wires and poles are checked in spring as snow can be a hazard.

Next came the really scary bit, a demonstration by Giovanna of how to perform the “scusulé” and it was our turn for the real “hands-on” experience. For her The vines are like a shop window and her love and pride in her work radiated. As we took over I am sure that Giovanna and Giorgio had never had their names called so many times in such a short space of time. It was easy to understand watching an expert but when it came to our turn every shoot looked different and you can’t stick errors back on. What really emphasised their careful work was a small strip of vineyard that separates their Campé plot from the Cantina. The owner in a desperate attempt to sell it to them has  replanted it with Nebbiolo to make it more attractive but it is a mess compared with La Spinetta’s pristine rows.

It was then time for an early al fresco lunch at L’Osteria del Vignaiolo in S.Maria halfway up the hill to La Morra. Excellent wine (La Spinetta Toscana Vermentino 2009 and Barbera Gallina 2008) accompanied the beautifully presented Piemontese specialities e.g. russian salad but topped with smoked trout. As quite often happens in this part of world the 2 hours scheduled for lunch overran substantially as the conversation flowed.

Tasting Bionzo from the Barrique

An hour and a half or so late we set off for a tour of the Castagnole delle Lanze cellars led by Luca and a tasting from the barrique of the exceptional 2008 Bionzo Barbera d’Asti Superiore destined for a future Liter Club offering. This was not our first visit and we have already briefly blogged about it.

The tour continued in Canelli to their most recent acquisition La Contratto. Anja led the tour of the cellars which stretch up to 30m below ground and are a true Aladdin’s Cave on 3 levelsof spumante goodies some of which are unlabelled and will at some time be tasted and if good used as “dosage” for future vintages. Although the removal/disgorgement of sediment is today a largely mechanical process, Mauro the cellar master skillfully demonstrated how it was once done by hand: pure circus. The tour was topped off by a tasting of the first La Spinetta/Contratto wines to be released in June: 2007 Chardonnay Blanc de Blanc and 2007 Pinot Noir Rosé. Both deliciously elegant. Probably not available in litres more’s the pity. 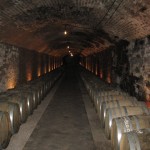 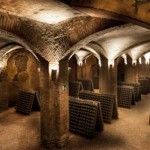 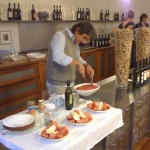 And so to dinner, eventually, back in Grinzane Cavour prepared and served by Giorgio (perfect Carne Cruda), Giovanna (handmade Agnolotti), Anja, Anke and Lucca, also with Brasato, wonderful cheese and bunet.

And of course litres of the 3 2007 Barbaresco Crus Gallina (their first purchase), Starderi and Valeirano and of course 2006 Barolo Campé and the pièce de résistance the 2000 Reserva Barolo Campé. All sublime and the end to the perfect day, tired and stuffed!