It’s that time of the year when you have to think or check before you venture out. Restaurants close, shops close, offices close, sometimes without notice, and everyone  heads for the beach or the mountains. With a stream of visitors we have had to make sure we book restaurants, not to ensure a table,  but to make sure they are open. 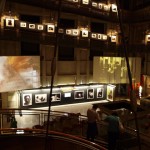 Both pizza restaurants in Neive are closed at the same time, the re-registration of my car from the UK to Italy has been delayed, my Italian driving licence is still in the post after 2 months and, most incredibly,  I have been trying to get to grips with Italian tax and was referred by the bank to Deloittes Italy who are (you guessed it) closed until the end of the month. Torres is open all of August and we have helped Eugenio with an English translation of a sign proclaiming that fact. It is our favourite bar and after a recent lunch there we had a quick cooking lesson from them on how to make their hot pizza bread: no we can’t share the recipe! As is the “Socio” in Castagnole where we had aperitifs; always dangerous and our last visit was no exception. Daniele insisted on us trying a recently discovered 40 year old Barolo Chinato and then produced some Absinthe (55°) . All this taking place underneath a church at lunchtime!

In search of an open restaurant last week we rang  l’Oca Giuliva for a reservation not realising it was on the same evening that I Nomadi were in concert there in Castagnole. I’m not sure what decade they began life but they are the Italian equivalent of say Staus Quo. This meant a reduced fixed menu that looked OK but we fancied steak (their speciality) but it wasn’t there. Fortunately I noticed that a couple on another table were tucking into what looked, from a distance, like a steak. I called il padrone over and managed to change our order to 3 juicy Tagliate (beef fillet). The wine has limited mark-up so for just €3 or €4 more than the Cantina prices we washed the meal down with Malvirà Arneis and La Spinetta Cà di Pian

The upside though is that there are Festas and parties everywhere and no car-parking charges in Torino where we spent a day recently sight-seeing. The National Cinema Museum is a “must”, housed in an incredible building, La Mole Antonelliana which was originally intended as a synagogue but bought by the City in the late 19th century before completion. There is a panoramic lift that goes up through the centre of the building and at the top provides a 360° view of the city and Alps, allegedly: no way I was going up there. In the central “Temple” you can lie on sofa-beds, with speakers in the headrests, and watch a film on the giant screens. The restaurant also provided a simple inexpensive lunch in unusual surroundings. The Egyptian Museum is also worth a visit as it houses possibly the best collection outside Cairo. For anyone interested in old things like me it was fascinating.

A free Jazz concert on a ridge in the vineyards above Coazzolo with bonfire and bruschetta, porchetta and other nibbles washed down with local wine laid on by the local community was also fun.

The wine producers and farmers however are approaching their busiest time and we are assailed every morning by the sound of tractors and other machinery kicking off. First are the hazelnut and Moscato harvests followed by the other whites, Dolcetto and Barbera and last of all the Nebbiolo. With the ground still pretty moist the harvest could be large and early. This morning the noise level was particularly high as PerLuigi the builder started work on the new entrance gates to the house at 07.30am. I was in the shower shortly afterwards as he fractured the water pipe so still soapy I threw shorts and t-shirt on and ran to turn off the mains: chaos! It’s now midday and everything has been sorted, the cement delivered, the electrician has inspected and given his requirements and the shopping done. For the first time in 3 weeks the roast chicken man was at the market and so things are returning to normal after the holidays and we can again enjoy “Chicken Wednesday”.