Once again we have had several days of slowing in the rate of fatalities.  The past two days have been under 5%, and both the number of people hospitalised and those in ICU beds has fallen for two days in a row.  The measures taken are working, but people are starting to get agitated.  We’re all sitting tight, but, as another round of bills, rent, mortgage payments and so on are due, more people are starting to worry more about that than the virus itself.

There has been a lot of theorising about 5G phone technology causing the Corona virus, or that it is not a virus at all, but the effects of 5G, and the virus is a cover story for it.  These are balls.  I’m not proposing to go all through technical details here – mainly because I’m not an expert (remember them…?) in it – but I will produce some evidence and some reasoning to refute these claims.

To begin with, Ofcom, the telecoms regulatory agency in the UK – among many others – has found that there is no risk to public health from 5G communications networks.  I imagine – though I do not know this for certain – that manufacturers of communications infrastructure also have to provide technical data on the equipment they are providing, especially in a tender process.  This information would include power ratings of the transmitters: if the power levels were over a regulator’s safe limits, I doubt the manufacturer would win the tender.  Ofcom found a maximum radiation level of 0.039% of the safe limit.  I would be more worried about the radiation coming from the screen of the computer I’m writing this on than 5G transmitters.  Or the microwave oven in the kitchen (if I had one.  A microwave oven I mean – I have a kitchen).  I read somewhere – I can’t remember now where it was, I’m afraid – that the average power from a 5G mast is 0.035 Watts at 10 metres.  Your microwave oven is likely to be at least 750 Watts, i.e.: far more powerful, and we happily stand right in front of them as they cook.  To my knowledge they have never caused a viral outbreak.

Then there is the lack of correlation between the 5G roll-out in Italy and the clusters of cases: the first 5 cities to get 5G in Italy were Turin, Milan, Bologna, Rome and Naples.  But the first cases of corona virus were not in any of those cities – where you would expect them to be if 5G was in operation there.  Furthermore, even though there were subsequently cases in all these places, some were much more badly affected than others – you would expect to see a similar per-capita rate in all 5 cities and we didn’t.  And I wouldn’t expect places in the Veneto, which had not had 5G technology installed, to have an outbreak, yet theirs was the second most serious, centred in provinces such as Padua and Treviso, but not Venice or Verona.

There is also the matter of the manufacturers’ futures: if this technology was shown to be fatal on a large scale, it’s not good business.  I shouldn’t need to point it out, but it may need saying: killing your clients is not a sustainable business model.  Eventually you will run out of customers, and even if you don’t, once it becomes clear that you have killed your clients and did nothing about it, you should lose sales.  Oh, hang on, tobacco…To be fair, tobacco sales have dropped in countries where there is recognition of the dangers.  And if I smoke, it’s basically me that is in danger – it doesn’t indiscriminately affect everyone else…since 5G is transmitted via electromagnetic waves, there would be no way for those responsible to be ‘immune’ – they would come down with it just as much as the rest of the general public.

Of course, to some the lack of evidence is the evidence.  This is no different to UFOlogists’ adamance that declassified reports that show no evidence of extra-terrestrial encounters constitute evidence of extra-terrestrial encounters.  Or, going back further, the ducking-stool.  I guess we all use the results we see to bolster our assertions.  But at least there is some sense in using evidence that 5G did not cause Corona virus to further the assertion that 5G did not cause Corona virus.  Saying that 2+2 = 4 is evidence that it does not equal 4 is neither logical nor rational (or true).

…continues very much as it has: plenty of ‘leisure time’…Businesses are continuing to do their best if they can find a way – I should have a proposal for getting wine to all of you later this week.  Most people are just doing what they can, which is very little.  At least with the sunny weather, people with any outside space at all have been going out more – which I imagine helps with mental health as much as physical.

The new hospital in Verduno has been opened to treat Corona virus patients.  I phoned my ex-surgeon friend a few days ago and he was actually at the hospital.  It was early days and he didn’t know where anything was, but he said it is an amazing facility.  And Piemonte didn’t have to outbid anyone to get it…

More and more people are wearing the facemasks in public, and even at home. Other than that, life plods on much as I imagine it does for all of you reading this – both of you.

Life within (and without…!) our four walls…

As alluded to earlier, the weather has been pretty lovely, if cold in the mornings, but the sun and warmth later in the day has meant that you can hear plenty more of your neighbours.  Even if the only person I see every day is my Sunday-lunch cooking neighbour, it’s heartening to be able to hear others around you.  There is a family, that I cannot see due to the high wall, in the next courtyard, whose children play outside a lot now that it has warmed up a bit and it is generally good to hear them.  But the youngest child does have a habit of screaming at the top of their lungs for minutes at a time, which does take the edge off a sit out on the terrace.  Another first-world problem…And there is birdsong everywhere.

As always, Noah has been an absolute star, and has been much more inclined to play outside, which has pleased me.  I realise that in the great scheme of things, having him inside and watching a screen for hours is not the worst fate that could befall him, but I am pleased that he wants to do other things as well.  This interest has partly been thanks to the weather, but mainly due to getting the walkie-talkies that he was given many moons ago as a gift, working.  They always did, in fact, but he has only just managed to get the hang of pressing the button when he’s talking and letting go when he isn’t.  A less welcome development is that much of my incarceration is now open to the elements…Though he does rescue me whenever I cry about the monster coming to get me.

The other day, as he was climbing out of the bath, he informed me that he was ‘a cheeky young whippersnapper’.  Later that day, as I was sitting at the table, I looked up to see him on the sofa, dancing to some music, wearing nothing but his police shirt, and wiggling his little bum around.  It was one of the funniest things I’ve seen in a long while.  I even got a video of it in case I ever need to blackmail him in later life.

Talking of funny things, I have continued my Netflix Odyssey with Derry Girls – as you see from my Sunday lunch photo, left. 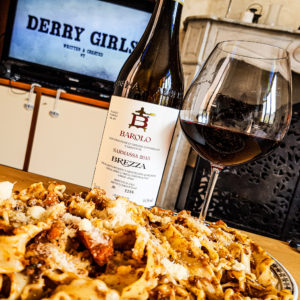 I know this is another recommendation that isn’t a new show, but I can’t be the only one who hasn’t seen this sort of Shameless-meets-The Inbetweeners-for-Northern Irish-girls.  The opening few minutes were ok, but then it really took off.  Orla is terrific, as is Sister Michael.  And the patriarch of the family.  They’re all good.

I also watched the film Private Life.  Funny and bathetic, with great performances all round.  I once heard Pride and Prejudice described as Mills and Boon written by a genius, and there is something analogous with Private Life.  The plot could have come from any number of banal social dramas or rom-coms, but rather than the characters being simply vessels to say the next line or move the plot on, they appear as real people.  One, for example, could easily have been the stereotypical harsh, driven mum.  The scene, however, where the standard film would have had her apologising, following her epiphany that how she was acting was wrong, was not clear-cut and unambiguous in Private Life.  The character felt much more real as a result – certainly in my experience, we generally don’t have an instant awakening, or an instant acceptance of something that we disagree with.  The end of the film was also perfectly ambiguous.

Given the weather, the terrace, and the amount of time I have on my hands, I have even been ‘gardening’.  Things are starting to grow again – not all of them, as I am not a natural gardener (by which I mean I can’t be bothered).  However, I have tidied up the terrace a bit and I hope that the vines and Wisteria in particular grow well.  Look on my works, ye Titchmarsh, and despair…(For the reader outside the UK, Alan Titchmarsh is a well-known broadcaster of gardening programmes.  He’s written some books, too.  Always seems like a nice chap.)

Well, that’s about it from here.  I have work to do.  Or at least, some plants to water…