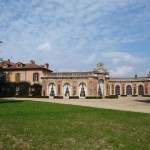 The history of the Alfieri Castle dates back many centuries and the family archives evidence that there were vineyards around the area in the 14th century. Wine has been produced at  the current site for 400 years. Originally the ancient fortress enclosed the village but in 1721 work was completed on its transformation into a family residence. A century later the position of the village was moved to its present site with a new parish church and town hall built. Positioned between Asti and Alba, and a short drive to Barbaresco and Barolo, it provides an ideal base from which to tour the surrounding wineries. 2 houses, one within the private park and the other in the courtyard of the winery provide very comfortable accommodation.

Marchesi d’Alfieri produces around 100k bottles a year of only red wine as they believe they can’t compete with excellent Roero whites from the surrounding area. We first experienced their excellent Alfiera Barbera d’Asti Superiore at the Osteria dell’Arco after reading a review in Decanter magazine. The 2007, of which around 20k bottles were made is destined for a long life (10-15 years probably) and has fantastic length and structure  with mature red fruit and berries. Produced only the best years it spends 15 months in French oak barriques  and is entirely biological but a somewhat pricey €21. La Tota Barbera d’Asti 2008 on the other hand is a more reasonable €10 and is made from the younger vineyards of various crus producing 40k bottles. Finished in (3rd use) barriques and bottes it is much more approachable and ready to enjoy now. Lots of fruit and a hint of walnuts and a tar finish. Although we didn’t taste it there we bought a couple of bottles of their Sostegno Monferrato Rosso (€7.50) on the advice of a friend. A blend of Barbera and Pinot Noir it has proved a good value buy. Light, easy to drink, with cherries, a little spice and vanilla and reasonable length. The easy drinking 2007 Costa Quaglia Montferrato Nebbiolo, their 4th harvest, was a decent example with very soft tannins but I prefer the the more muscular Nebbiolos from our side of the Tanaro. Only 2k bottles produced in what they describe as “more of a garden”. Last but not least was the 2008 San Germano Monferrato Rosso which despite the name is made entirely from Pinot Noir and spends 12-15 months in French oak barriques and  several months in the bottle before release. Well balanced wine with characteristic violet hints but still needs time.