After just 9 months of to-ing and fro-ing between Neive and the Revisione Centre (MOT) in Canale to visit the girls who visit occasionally from Cuneo HQ, we at last have our Italian number plates fitted to the car. Everyone asks why we bothered, (although it is the law after  6 months), and having forked out over €1,000 for the process I wonder myself. The car is a Honda CRV and originally Swiss LHD so they had to obtain a technical schedule from the manufacturers and then translate it into Italian. Forget the “we’re all part of Europe” merde. Insurance is another enormous obstacle but with the help of Rico from he local garage we managed to find a discounted policy locally that recognised 5 years of No Claims Bonus from Saga. This reduced the cost to a very unreasonable €870 and only 3rd Party without Fire & Theft. Ouch!

The last part of the jigsaw is to register with a local doctor and get the Tessera Sanitaria (health card). We have now had 4 false starts over the past year due to us being retired but not getting a State Pension nor looking for work and being English. This time we decided to enlist the help of the local Commune and charming Sr. Biffi reckoned we had an excellent chance, having proved solvency, International BUPA coverage, British NHS coverage, inside leg measurements and confirmed Italian residency. We could have saved €29.04 for the tax stamps bought at the local tobacconist if we had realised that the document he issued a year ago was the mystical oft mentioned “Permesso di Soggiorno”; nowhere does it actually say that on the paper. Anyway everything was photocopied for HQ by the local Health Office in Neive and last week we visited the girl in the Foreigner Office in Alba who had returned from holiday. We also avoided crowded places in fear of picking up an infection. We explained that our friends in Le Marche in similar circumstances had achieved the impossible by purchasing Italian €400 worth of health insurance from the State. She was not moved and declared that the law changed last year and that it was now not possible unless we had been resident for 5 years or were getting a state pension. Impasse!

Spring has sprung with highs and lows. At the low end I have been getting regular dressing downs from the local machinery repair place. The piston/cylinder of my strimmer (decespugliatore) keeps breaking and sr. Cavallo has told me loudly with much waving of hands, particularly when there is an audience, that my mixture was crap. Having bought a new container, fresh petrol and asking him to add the 4% of his excellent oil it worked for just half an hour. The problem has been relegated to a “mystery” and we now await a miracle. The 10 year old one he lent me works perfectly so I haven’t been back yet but having also broken the cutter of a friend’s industrial mower I am building myself up for another confrontation.

At the high end, anyone thinking of the best time to visit the region next year the first weekend in May could be the answer. There is an annual Barbera festival in Castagnole delle Lanze where all the locals in the historic centre open up their courtyards and a huge party ensues. There were at least 18 different music points with everything from Jazz, rock bands to DJs, many producers offering tastings and lots of excellent food although we avoided the “Agnolotti del C*nt” ! The Italians love to party. 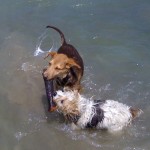 After the sad loss of our much loved Sherry  we decided that a new puppy was in order as Mocha looked very sad and needed a baby to mother. We had been recommended to a rescue centre in Pollenzo, Il Rifugio di Fido, and went looking for a small to medium puppy. They certainly “sold us a pup” and now at 8 months we have an adolescent who towers over Mocha and is still growing. Amo II is delightful, great with kids and other dogs, fairly obedient but loves chasing chickens and redistributing the rubbish bins around the kitchen and garden. Mocha is bemused but just about remains the boss.

The weather has been fantastic and the pool has reached 26c but like the UK we would like some rain. It almost came a couple of days ago but the black sky delivered just a few minutes worth while in Castagnole, just 5 minutes away, there was torrential rain and a  a hailstorm. Hopefully there has not been too much damage to the vineyards.