So much choice at Sarotto

A tasting at the impressive new cantina of Roberto Sarotto can turn into a  marathon affair with such a variety of wines to savour. The new cantina will incorporate various tasting rooms and offices and also a wineshop with tasting bar. I am not sure how successful the wineshop will be as the Cantina is not the easiest to find but the idea is great.There is almost a perfect set of wines to satisfy every mood and taste. 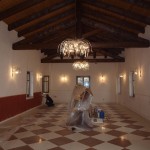 To be picky, in common with most growers from the  zone there are no “bubbles”; unless you count his very drinkable Moscato d’Asti*. As one of my friends so rightly points out, it’s better than drinking lemonade to cool down in the summer, although at 5° alcohol best not by the pint! On the overwhelmingly positive side I essentially like all his wines and as importantly, his prices.His delightful wife Aurora (she now has a Gavi named after her that we tried at home later which was also delightful), took us through most of the range and over the course of an hour or so we tasted his:

Vino Rosato Rosae – I love this blushing 100% Nebbiolo that is left with the skins for just one night: the perfect aperitivo)

Langhe Rosso Enrico 1° -made to celebrate the birth of his son Enrico in 1993 and not often since: for the first time I could buy some. A blend of,  predominantly Cabernet Sauvignon, and Nebbiolo with great length and structure and destined for long life. As I write this I’m not sure I bought enough. Another excuse not to cross the Alps for a Cab Sav fix.

Barbaresco Currà –2006 marks the first year from this classic vineyard and what a debut. Made with around 20% of late harvest grapes , an unusual twist. This is elegance personified and delicious even so young. A classic at under €20 a bottle.

There are other offerings that we didn’t taste but they are already in my cellar, in particular the Gaia Principe Barbaresco, Bricco Bergera Barolo, “Elena” Barbera d’Alba* (named after their daughter), and a nebbiolo made in the Amarone style with late harvest grapes called aptly “Amarolo”. Not to mention Dolcetto, Brachetto and Grappa.