Well, Easter has come and gone and we’re in mid-April.  Spring, damaging frosts at the start of the month notwithstanding, is here.

And that means growth in the vineyards – but not only for the vines.  Around the time of budding, we also get the arrival of the Nottue – Noctuids, which Merriam-Webster defines thus: “any of a large family (Noctuidae) of medium-sized often dull-coloured moths with larvae (such as cutworms and armyworms) that are often destructive agricultural pests”

And destructive they are: as the name suggests, they are nocturnal, and the caterpillars feed voraciously on the sprouting shoots that would, if left unmolested, become the branches that produce the fruit and foliage of the vines.  Naturally, Nebbiolo vines are the most affected – it is not a fact yet fully ascertained whether this is due to sod’s law, or the discernment of the caterpillars.

In order to combat these in a way that considers the environment as a whole, you basically have to get up in the middle of the night and pick the buggers off your vines – going row by row, plant by plant, with your head-torch, looking for them.  You get a scene like this: 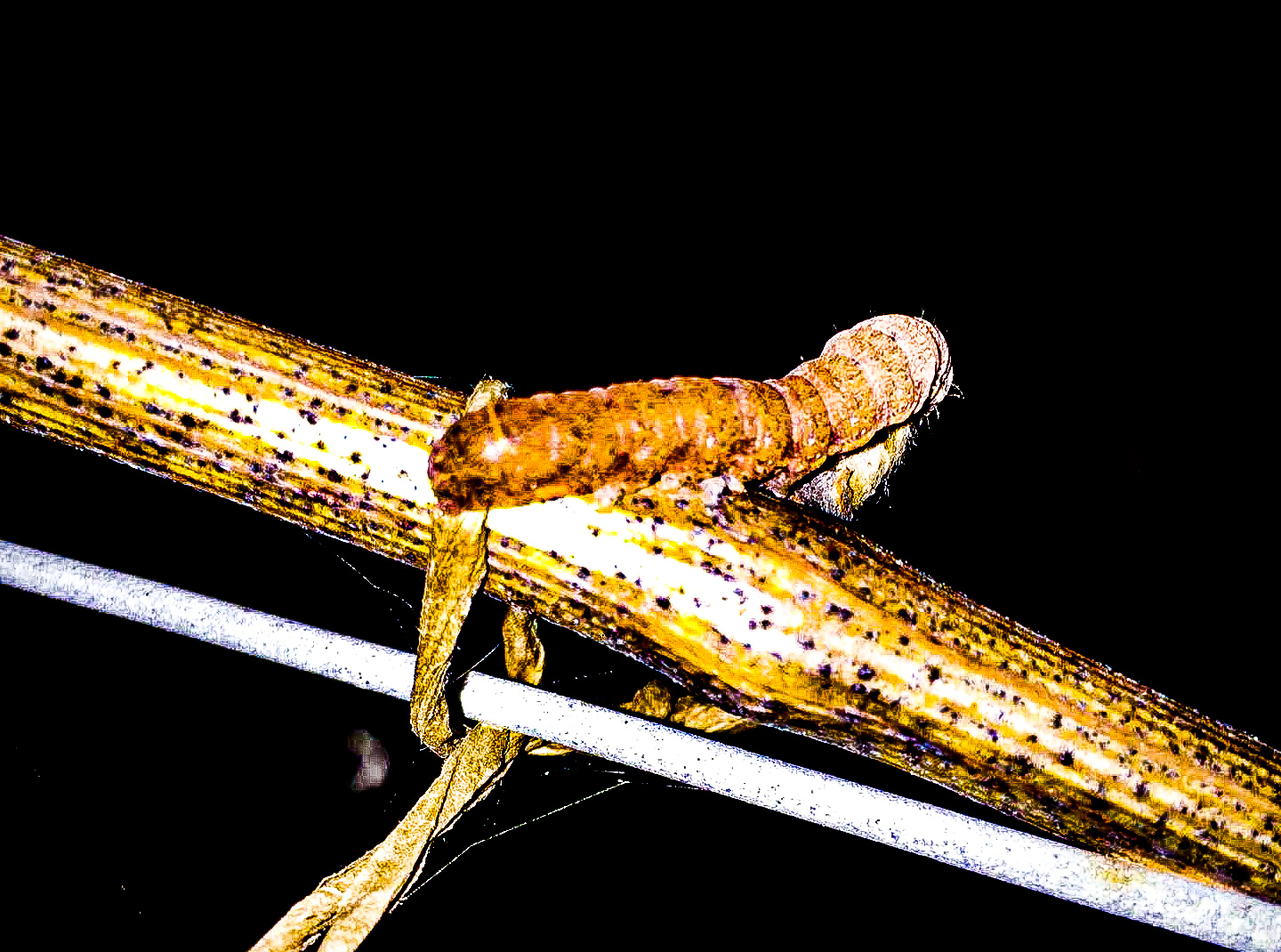 A nottua about to be unceremoniously separated from its dinner

This year, however, producers all over Italy are trialling a system of minigonne – mini skirts for the vines: 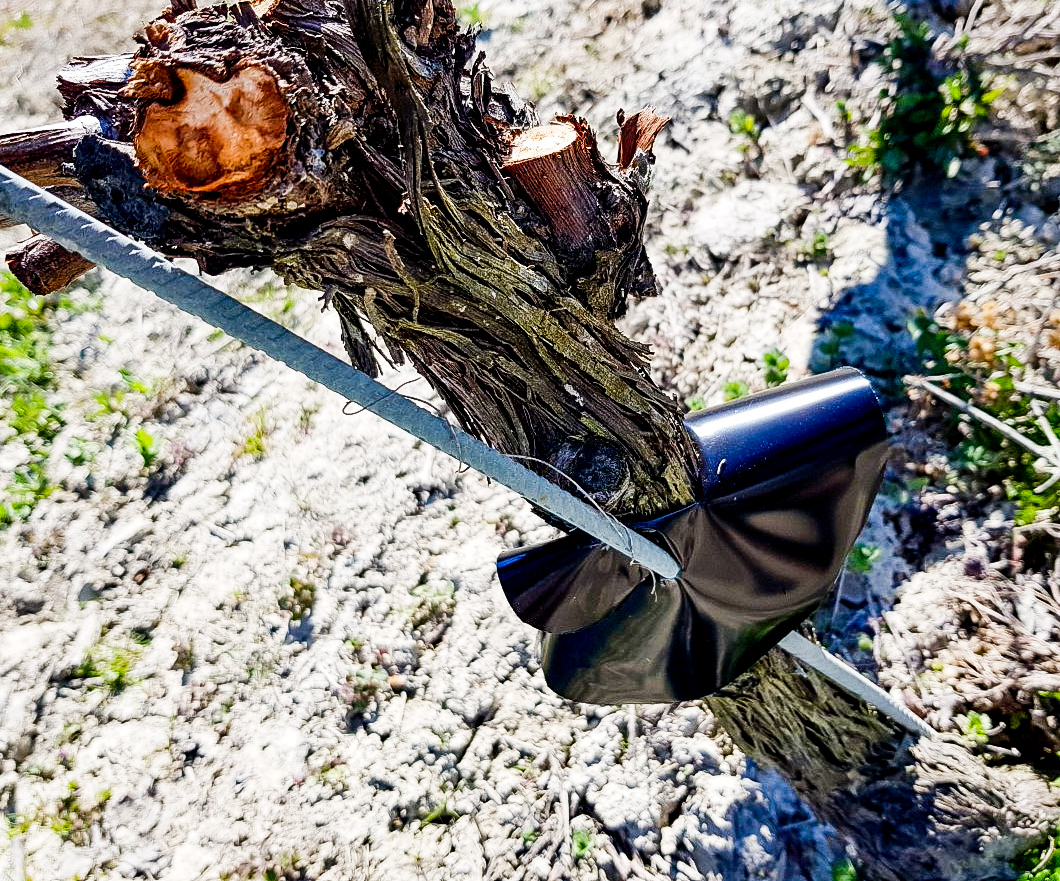 The rather fetching Mary Quant number as modelled in Mosconi vineyard

If you can wrap them around the vine in a way to leave the vegetative growth free to roam, while preventing the caterpillars from reaching it, you’re onto a winner.  If…I claim to be no great practitioner, but I did my best. 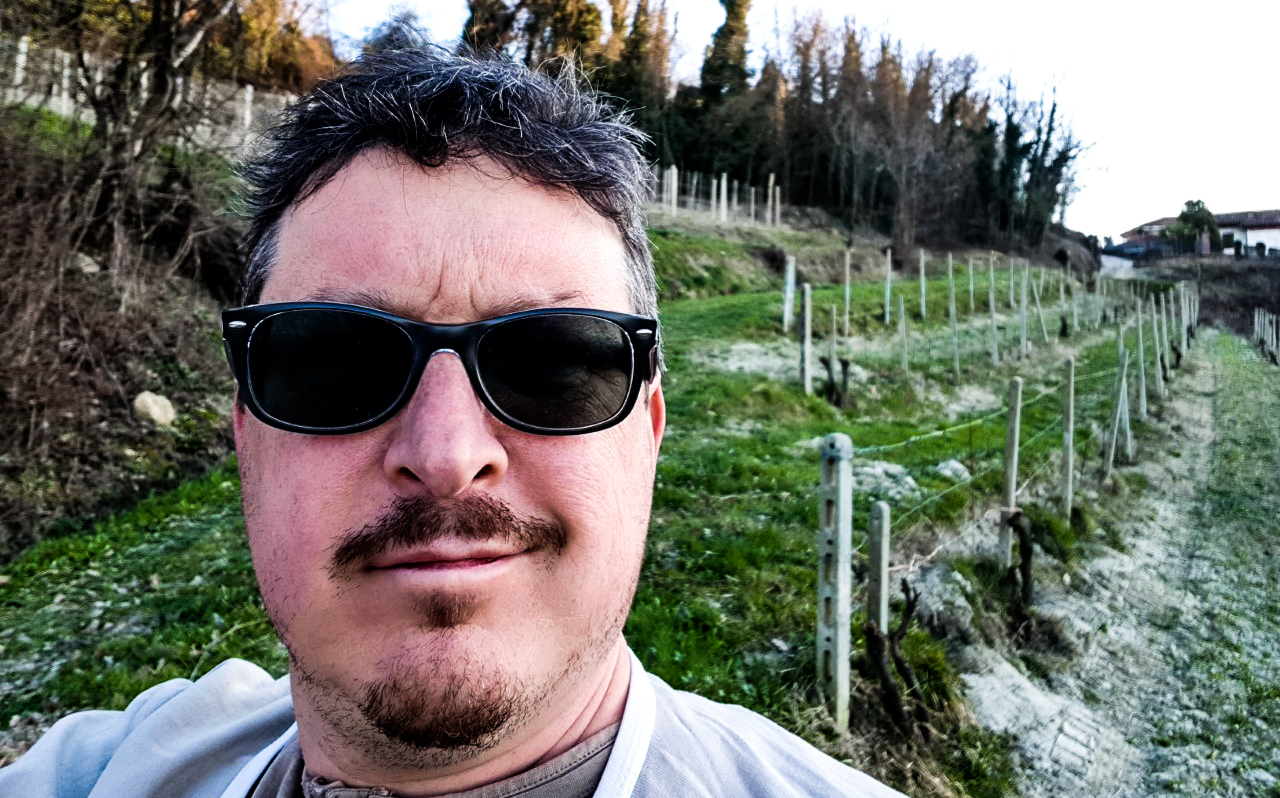 The idea is that you only have to pass through your vineyards once, instead of every night.  And the minigonne are reputed to last 10 years.  Though I will believe that when I see it – if you wrap it tightly around the vine now, what of growth…?  It’s true that vines, as creepers, tend to add length rather than girth, unlike trees, but vines do still suffer from middle-age spread.  Will the constriction of these skirts affect the vines adversely in the future?  I assume that the nibs who developed this system have looked into all that kind of thing, but there is nothing like the real world as a proving ground…

(Back) Trouble in Paradise

Anyway, whatever the merits of the system in stopping the little blighters – and if you only have to pass once through the vines in 10 years, it looks pretty good to me – its merits as an activity leave something to be desired.  I started ‘helping’ (I use that term very loosely) on a Tuesday afternoon.  By the time I went home on the Wednesday evening, I could hardly walk.  After a hot shower and something to eat, I decided that this was, in fact, more serious than simply being tired and achey.  There was something che non va, as they say here – something that doesn’t go or work, something that’s not right.  What I’m trying to say is: I realised that there was something wrong.

Now, those of you intimately acquainted with my good self will probably be aware that a number of years ago, my employer of the day decided that it would be quite a wheeze to break my back.  This he did with some efficiency.  Jolly painful it was, too, to say nothing of requiring 19 days in the finest spinal repair shop that Piemonte; perhaps Italy; has to offer.  Well, upon my return to the domestic lodging following that diverting little excursion, I undertook a series of daily exercises aimed at giving me as much flexibility and strength as possible in order to mitigate the effects of having 3 vertebrae joined by adamantium (I’m pretty sure that’s what they used.  I get these weird blades shooting out from my knuckles, too…).

So, on this particular Wednesday evening; and not without a little trepidation that I would make the whole thing worse; I tried a couple of said exercises.  Within 5 minutes the pain was completely gone…I was pretty surprised, I have to say, but it just goes to show: those medical-types who operated and gave me the exercises to do knew their onions.

(I didn’t know which link for ‘Trouble in Paradise’ to go for above, so here are some alternatives that Google threw up: Alice Merton, Ernst Lubistch, Al Jarreau, Rufus Wainright, Huey Lewis.  There was a documentary about the monthly Full Moon Party in Thailand that seemed to feature an inordinate amount of rubbish on the beach, and what appeared to be a rather disturbing one ‘uncovering hard truths in the underbelly of Asia’ about The Maldives, which had 4 fellas with machine guns posing on the image.  This is supposed to be an upbeat sort of post, so I didn’t bother with those links…)

(Now that link is the level of gravity I’m aiming for.)

I have been doing some work in the cantina – topping-up barrels and packing orders that are now beginning to appear.  Last Friday, I was helped by Sonia, and I have to say that at one point I made a complete Horlicks of the operation.  I needed to put some magnum bottles (1.5 litres) together for an order that required an extra back label.  So I began to attach the labels.  When Sonia arrived, she said, ‘Are they ok above the existing label, or do they need to cover it?’.  I hadn’t thought of that.  It will, I am sure, come as little-to-no surprise to learn that they needed to cover the previous one.  So I then had to remove the ones I had done – thankfully not all 58 of them, but enough to be a bit of a pain, especially as a solvent was required to remove the adhesive.

There was also 1 double-magnum (3 litres) and a 5 litre bottle to do.  So of course I put the back label for a different wine on the 5 litre bottle.  Then I rectified it by putting the back label for the correct wine on, but for the magnum size…By now, the grey cells were dulling somewhat, so it was only to be expected that I would try to check we had put the correct wines inside the wooden boxes by trying to open them once I had sealed them shut.  I took a moment out to step back and stop laughing.  I put a couple of bits of paper down on a large stack of cardboard.  Which immediately fell off the table, spreading out all over the floor.

With Sonia’s patient help, we got the correct labels on the correct bottles in the correct cases – she must have felt like I sometimes have with Noah while following in his wake trying to clear up what he has just done, only to find that, whilst I was clearing up that mess, he was busily engaged in making a new one for me to tackle.  Thing is, he’s not yet 5 years old: what was my excuse on Friday?  The solvent, perhaps…Anyway, here are some photos of nice barrels for you: 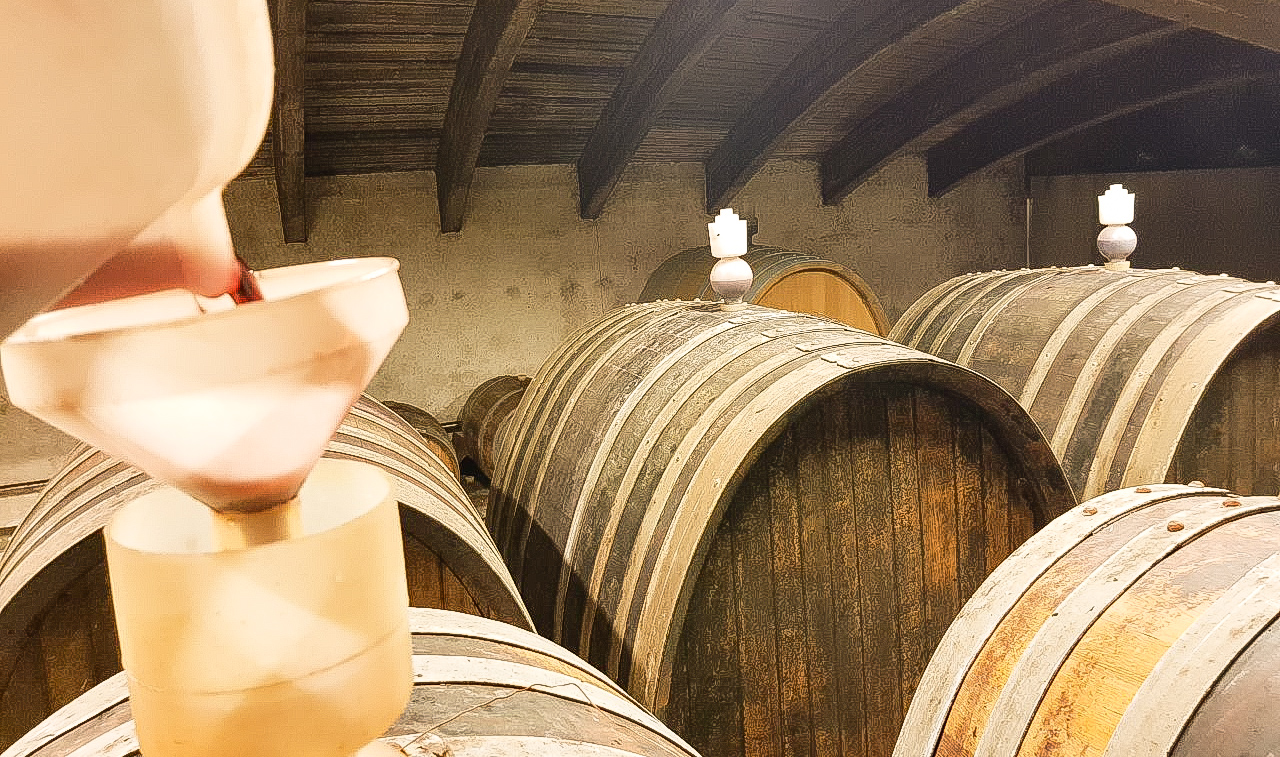 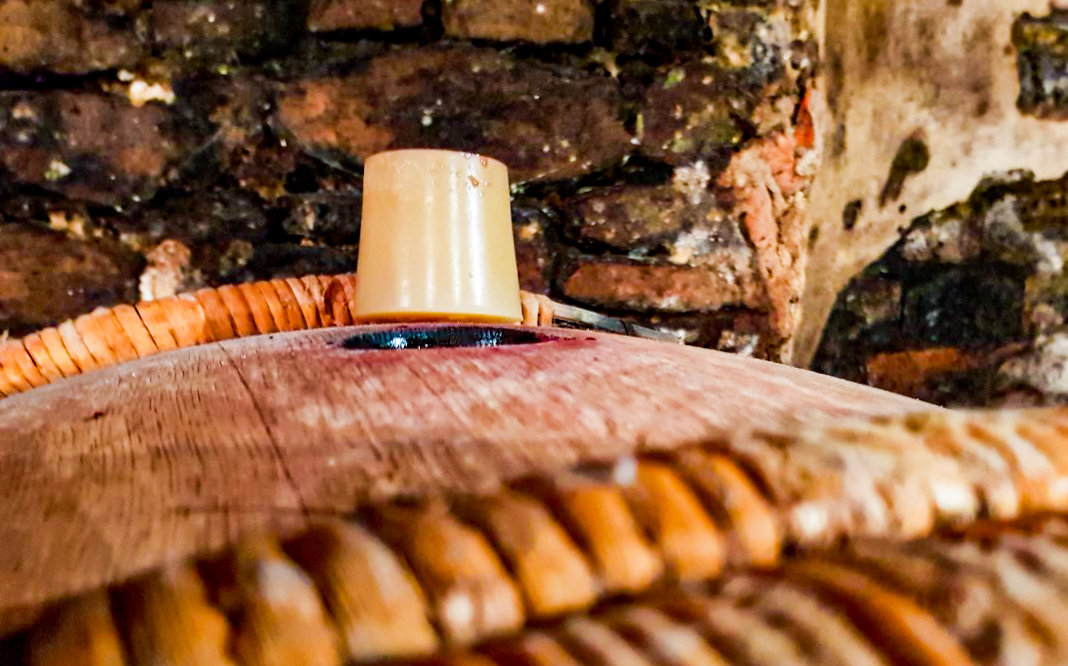 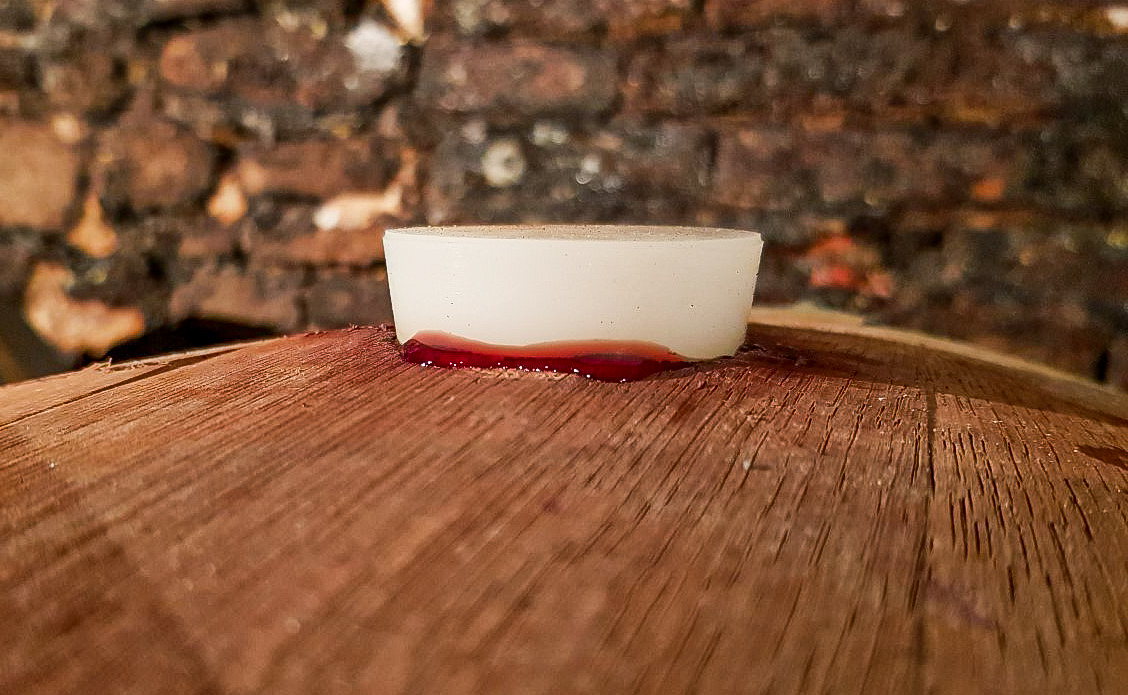 Have you got the bottle…?

…Because this week, as alluded to there, I certainly had: I have been helping with some bottling.  And jolly good fun it is, too, though I’m not sure why: loading empty bottles onto a conveyor should not really count as good fun.  But there is something almost therapeutic about the repetition and the rhythm. 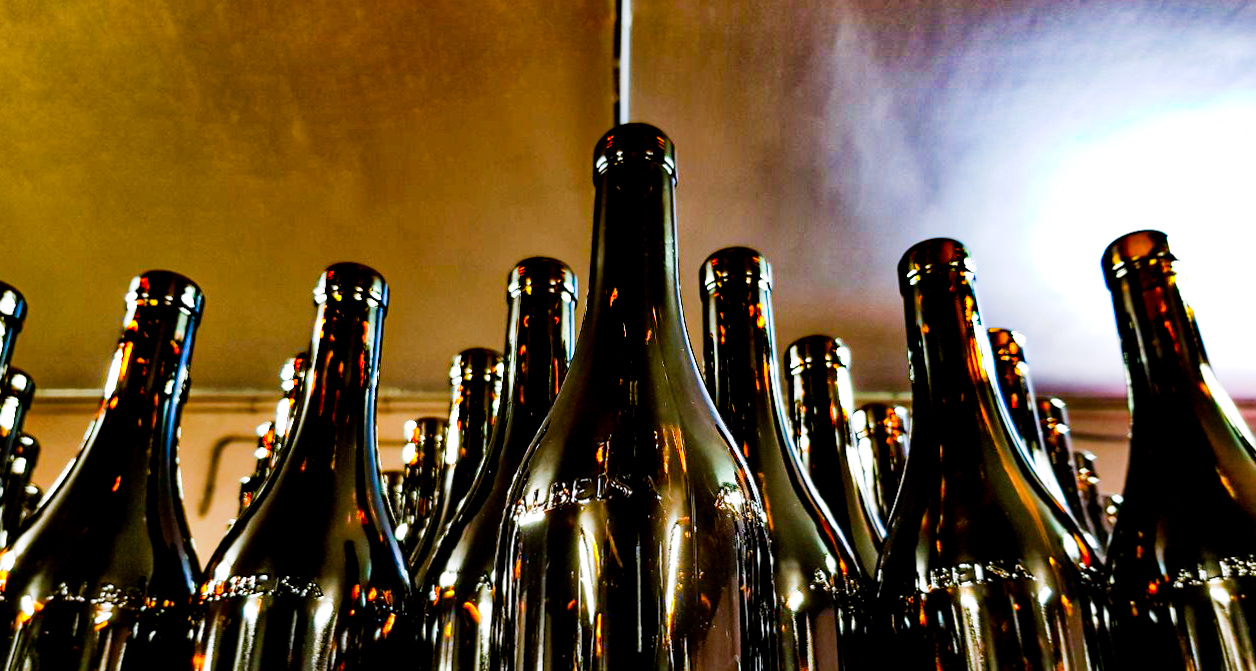 Primed and ready to go – next time you’ll see them, they’ll be full. 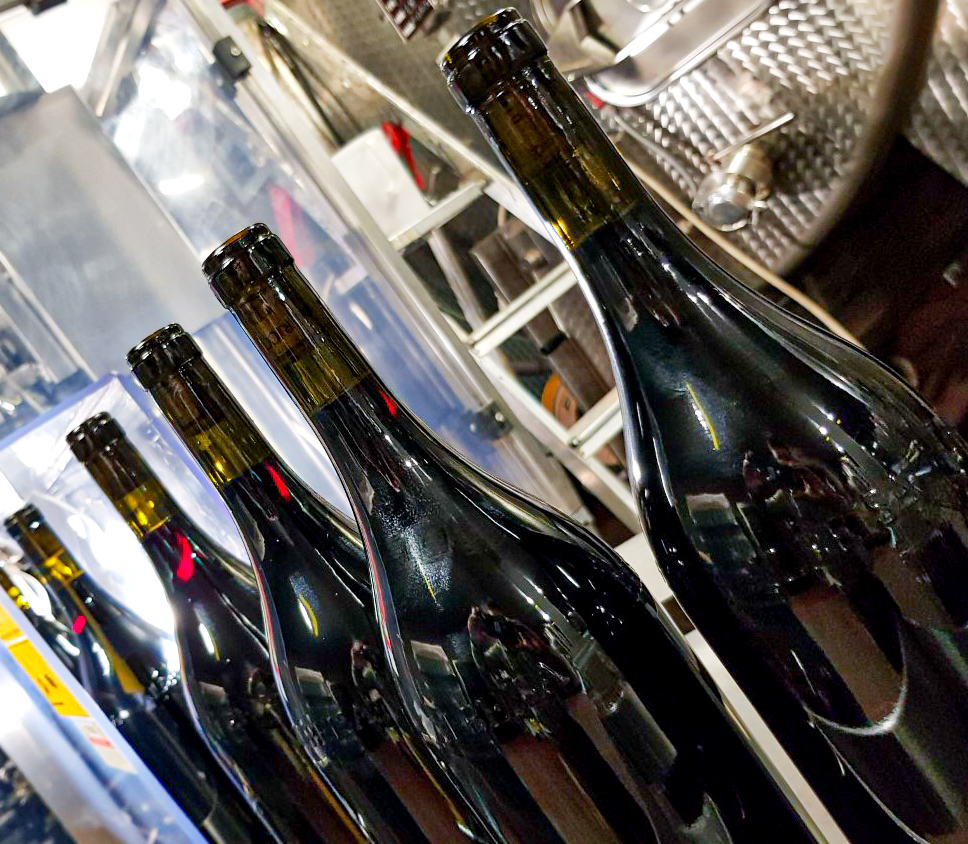 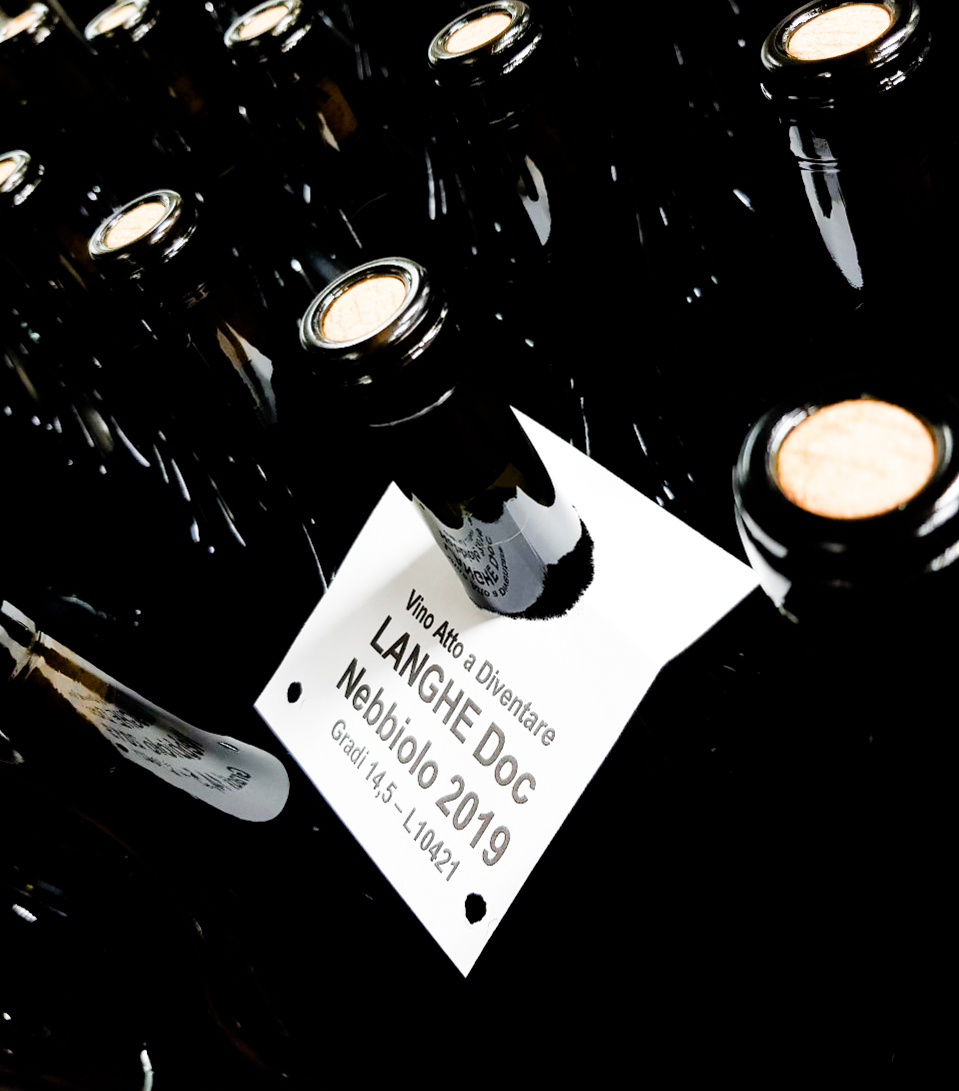 In case you were curious as to what was in them…

The Rite Of Spring

In the 3 or 4 weeks since we put the skirts on the vines, it has really become spring.  We have had, like many places all over Europe – see videos of Burgundy for further details – a late and potentially devastating frost here.  But everything has really burst into life.  That’s why frost now is so devastating – things are sprouting out all over the place, and then they get frozen.  Probably didn’t need to spell that out, did I?

Now, everything is fresh green once more, unless it’s the Wistaria (it was a Mr Wistar after whom it is named, so Wisteria makes no sense to me) in full bloom – though as the photos show, my little one has nothing on the house next door… – or other flowers on the terrace here: 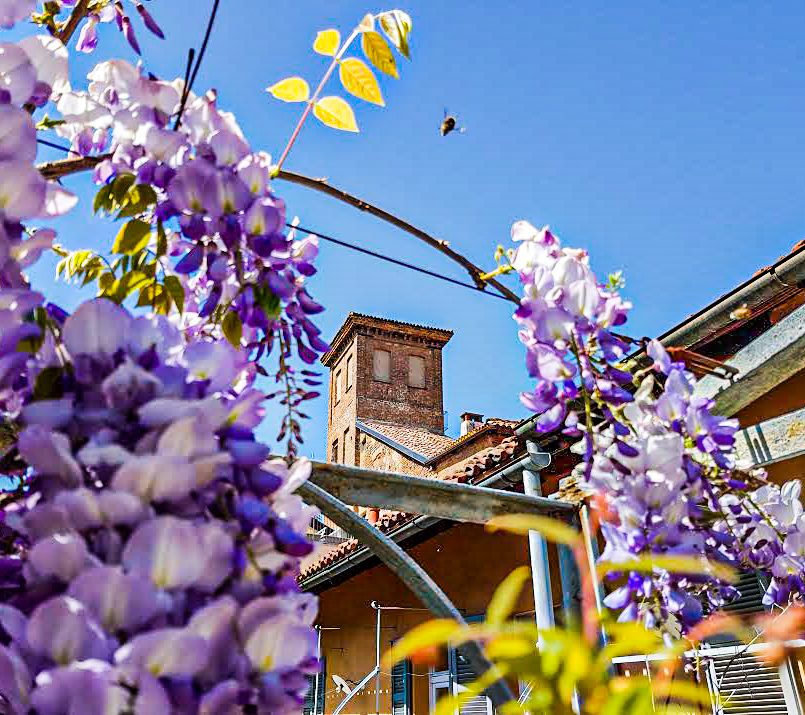 My Wistaria, attracting bees. It’s a nice burst of colour on the terrace, but it’s got nowt on this…: 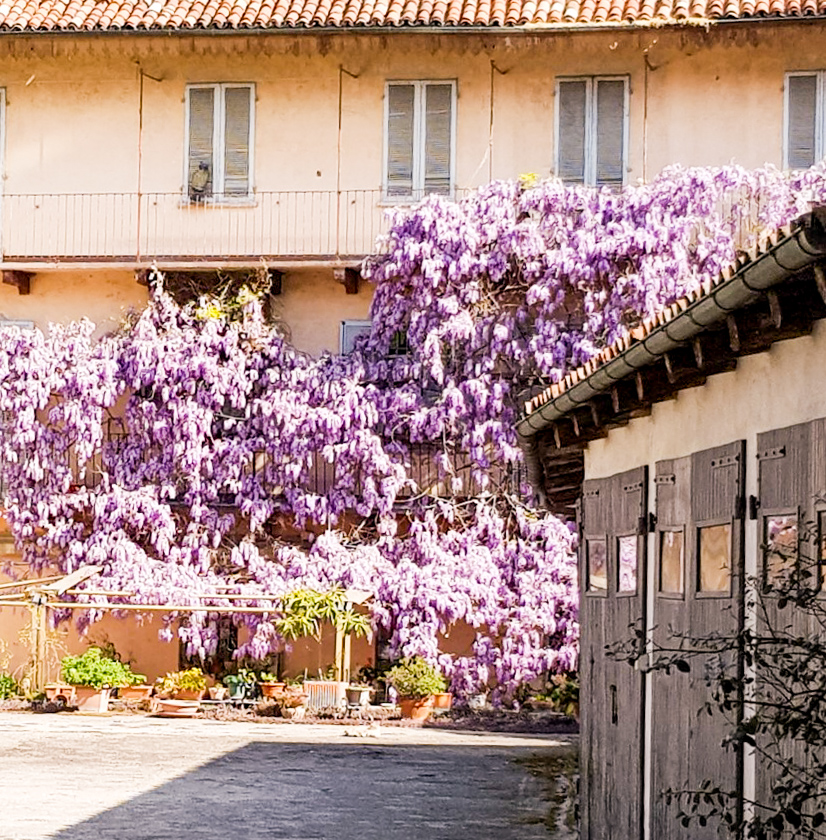 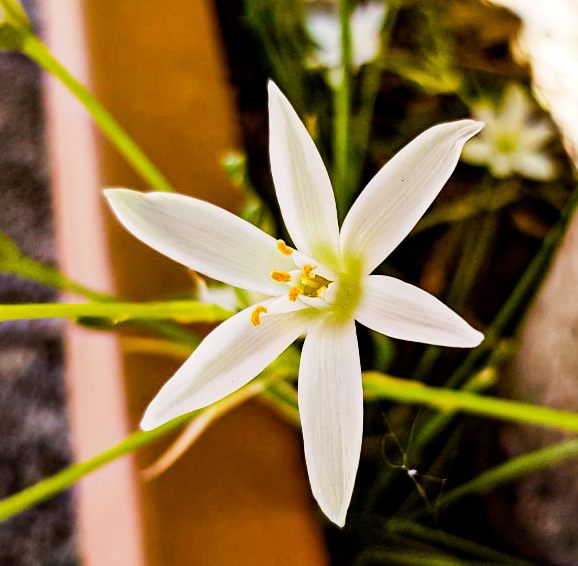 Spring comes to the terrace! 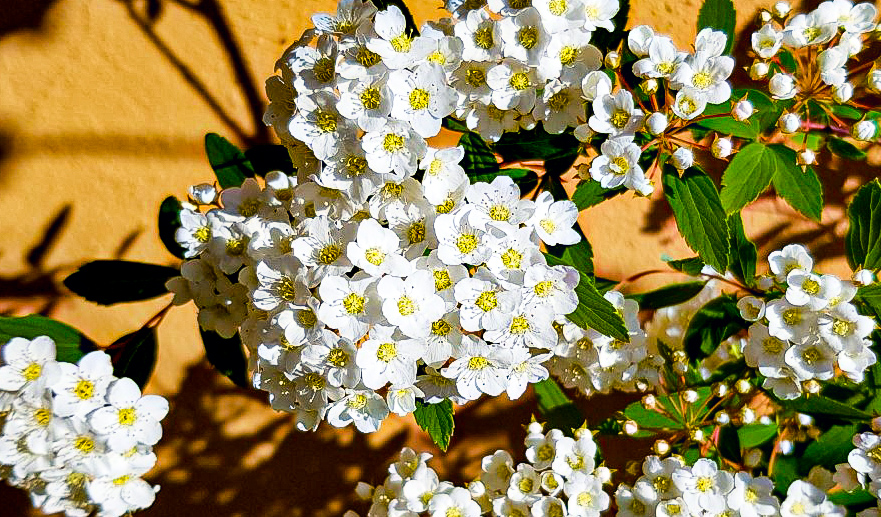 These are starting to bloom in great profusion now, too… 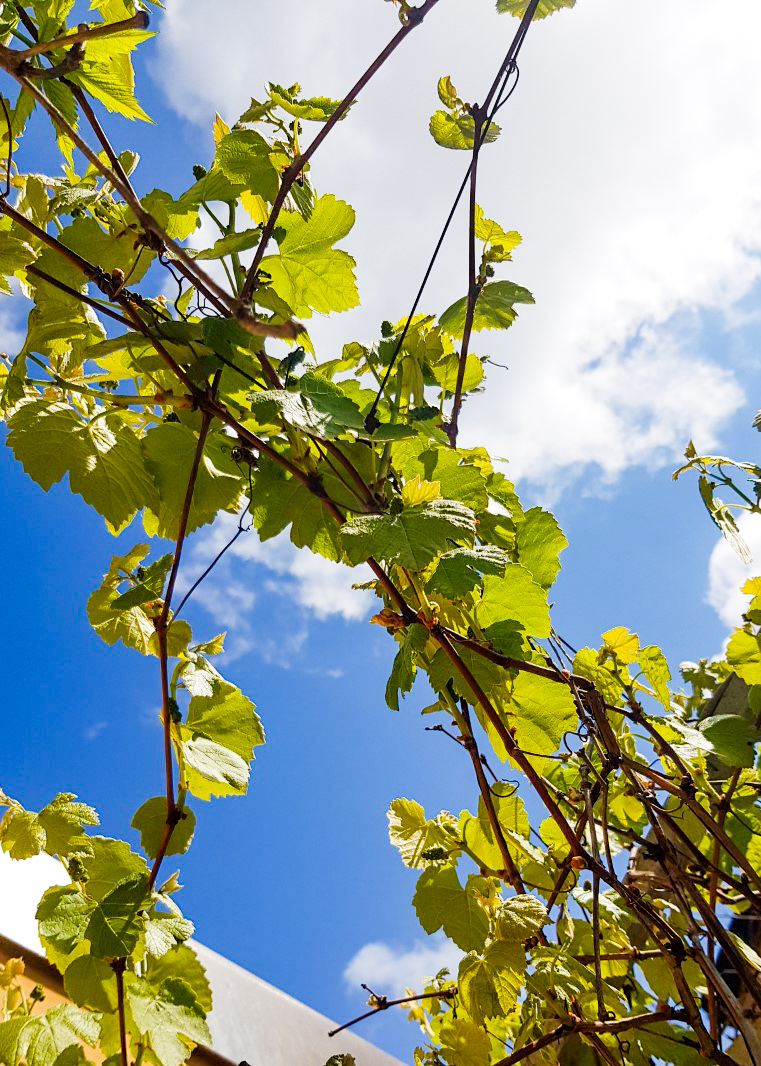 And my vines are growing, as well

As if all this wasn’t enough, I can sit outside to write this!  Oh, bliss.  I love it when my home office looks like this:

Mind you, in 2 months I’ll be standing in front of the air conditioner and complaining about the heat…

That’s it for now, we’re all caught up.  Once I have stopped hearing the clanking of bottles in my sleep, I may be in the mood to write another of these.  Until then, stay safe, enjoy going out again (if you’re allowed) and have a glass or two of Piemontese wine…!