It’s always difficult to plan tastings here as timings are quite difficult to gauge. Take this morning for example, we had an appointment at Franco Rocca for 10.30 and left 4 hours or so later after an impromptu lunch prepared by his lovely wife Susan. 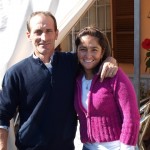 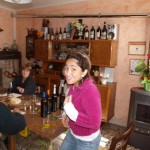 Susan off to cook the pasta 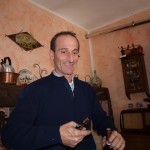 For me the highlights of the wines were:

Barbera Bricco Sterpone 2007 which comes from 60 year old vines and spends 20-22 months in Botticelli. Dark, full bodied, chewy liquorice. I bought it in magnums (only a few left) for those winter stews.

Albesani Barbaresco 2006, which although exhibiting the big tannins of the vintage, is an elegant wine with lots of fruit evident.

L’Opera d’Art which is unusually a blend of 70% Freisa (but made secco) and 30% Barberba. A nice light everyday wine that Bobtino believed could be taken for a rosè with your eyes closed. The nose reminded me of roast meats cooking which set the juices flowing.

Ombranera Barbera 2007 (Black Shadow) a name used by Nonna for a presence who lived in the valley. Nothing dark here with nice spicy undertones. 18 months in botte grande.

We tried to leave, once, and having enjoyed salami and cheese with the wine were not that hungry but it was 1pm and Franco was and insisted we stay for pasta. Within minutes Susan reappeared from the kitchen with a steaming bowl of Tajarin al Ragù (fine spaghetti/tagliatelle with meat sauce and we emptied the bottles remaining from the tasting.

As I mentioned, I bought some magnums and it was great to watch Franco using a capping machine that he remembered his Father buying when he was a lad 40 years ago and adding the labels by hand. Fantastic hospitality, excellent affordable wines and another view of Neive from a different angle. 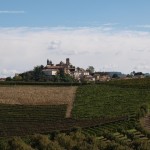 Neive viewed from the Rocca cantina

I was reminded that just down the road is the cantina of Negro Giuseppe who we visited recently and whose wine we had drank with dinner at La Torre del Monastero on Friday. Incidentally the excellent costate (ribbed steak) is supplied by Daniele & Giorgio Cordero who was Franco’s best man. Giorgio Negro is another of Neive/Barbarescos’ top traditional winemakers and our particular (almost ) everyday favourite is his Monsù Nebbiolo (gentleman in Piemontese) that we drank with our steaks. It is a blend of their 3 Barbaresco Crus including Gallina (the most famous in Neive?) but  spends just 18 months in oak casks and then 2 months in the barrel. Half the price of the Barbaresco but a great example of nebbiolo, garnet red but full-bodied, intense, spicy, berries. Having said that the Barbareschi are fantastic and reasonably priced and the Arneis always sneaks into the back of the car.