So, from 18th May we have been allowed out again in a form much more redolent of our lives before Corona virus.  In Piemonte, we chose to wait until Saturday 23rd May: here in Alba, the squares were full, people were chatting, getting their coffee or aperitivo (usually dependent upon time of day, but not necessarily…).  It felt almost like old times, except that almost everyone was wearing a mask, and distances were being kept.

I had Noah over the weekend and again for a couple of days in the week, meaning that I was alone again with a stretch of days in front of me on Friday evening.  This seemed like an excellent time to head out for my first restaurant dinner since February – if not January… 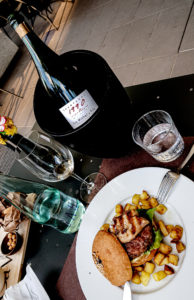 As you see, I pushed the boat out: I had already contacted the peerless Mauro at Caffè Umberto several days before to say that I would be requiring a table for one and their beefburger with foie gras.  And the weather played ball by allowing me to sit outside.

Now, with it having been some time since any of us was out and about at restaurants – they had only reopened on 23rd May, remember – and feeling like we all deserved a little ‘Well done for getting this far’, I arrived about half-an-hour before kick-off with a bottle of something fizzy so that we could all have a little glass and toast still being around.  And that leads me nicely into what we should all be looking forward to drinking as we each emerge from our deepest respective lockdown phases.  And, yes, I realise that this is a very middle-class, comfy, even smug blog post (even more than usual, that is…).

So, what I celebrated with the staff at Caffè Umberto with was a 1990 Guy Michel Champagne, disgorged on 25th November 2017.  Yes, that’s right, 27 years on the yeast…I found a terrific website that sells only Champagne and has regular offers.  When this producer came up, I took a punt on this wine – and why not?  They also had a 2002, disgorged at the same time, for €44.  And a 1982, disgorged at the same time for €72.  It will be worth keeping my eyes open in case these come back onto discount…

I could not find out much about the producer from Tom Stevenson & Essi Avellan’s wonderful book – Christie’s World Encyclopedia of Champagne & Sparkling Wine – nor from Guy Michel themselves: they appear to have a facebook page but no website.  However, the wine was definitely worth the admission fee.

The 1990 cuvée we drank was 70% Pinot Meunier, 30% Chardonnay.  There was some noticeable oxidisation on the nose, but by no means extreme: I expect it was made in a relatively ‘neutral’ style, rather than looking for the reduction of a Dom Perignon, or the fizzy-Château-Chalon style that old Anselme Selosse likes.  (At this point, I should say that I have had Jacques Selosse only once.  It did strike me as being like a Vin Jaune with bubbles, but, given that I like Vin Jaune, this was not a problem for me…!  It is unfair to judge a house’s style on one wine – more than that (or less, in fact), on one bottle – however…)  There was a strong mushroom overtone on the nose, which, with a bit of air, started to show caramel characteristics, too.  On the palate, there was the age coming in: this wine was more what the Italians would call frizzante – perhaps even vivace – than full spumante.  There was the mature character of the flavours as well: again mushroom and some biscuity notes from the Chardonnay.  It was pretty full, clearly ripe and still had very good acidity (as I would expect: it shouldn’t disappear over time): a hallmark of 1990 as a year in Champagne.

So, apart from any 1990 Champagne you may have access to, what should you be drinking to celebrate partial liberation?

Fizz is always the obvious choice, and as luck would have it, Piemonte makes some really cracking ones…Alta Langa is a DOCG created in 2011 with the promotion of the wine from its previous DOC from 2002.  It is a minimum 90% Cardonnay and/or Pinot Noir, with the remainder, if you chose to have it, made up of indigenous, non-aromatic Piemontese variteies.  Always a vintage wine, it is made in the same way as Champagne and ages on the lees (yeast) in the bottle for a minimum of 30 months.  I would recommend all of the following if you can find them – and they are worth finding: Paolo Berutti, Giulio Cocchi, Contratto, Coppo (combine these two on the same day: visit the amazing cellars in Canelli with me…) Deltetto, Enrico Serafino, Ettore Germano and Marcalberto.

‘But we’ve been left out’

Piemonte makes some other great fizz that is not in the Alta Langa DOCG.  If you see any of the following buy them: Bruno Giacosa – a long track-record of excellent Champagne-method wines; Poderi Colla – yum; Deltetto again  – all their fizz (as well as the rest of their wines) is excellent; Francone – especially the rosé made from 100% Nebbiolo; Josetta Saffirio Nebbiolo d’Alba – the pink fizz, not the still red (which is also highly recommended, but not the thing if you want a fizzy pink…); Massimo Rivetti – white and rosé with extended lees ageing; Franco Conterno – white made from 100% Nebbiolo; Demarie For You – 100% Arneis made in the classic method; Cascina Baricchi; Vignevolute – Diecigiugno.

There are plenty of others that I have either not tried, or been remiss in not mentioning.  Look out for them, too!

Local traditions count for a lot.  Italy is a country awash with them and in thrall to them.  However, if we want things to stay as they are, things will have to change…

Moscato d’Asti – the proper stuff, made here – is actually a very good pairing with savoury dishes, even if the locals would never dream of it (except about 4 of them who were at a Moscato With Full-English party a few years ago, and were agreeably surprised).

The key, which producers here understand, is that in a sweet wine such as Moscato d’Asti, the important consideration is acidity.  On the face of it, it seems that sugar would be the crucial ingredient in sweet wines.  However, when making a sweet wine, generally an abundance of sugar is a given: for Moscato d’Asti, for example, the fermentation is halted at around 5 – 5.5% alcohol (higher than this is forbidden by law).  So the wine will have plenty of unfermented sugar – if the grapes are picked at, say, 12% potential alcohol, then we have around 110 to 120 grammes per litre of sugar.  Thus, to a degree, the producer does not have to worry about sugar – there will be sugar.  In order for the wine not to be cloying, however, we need something fresh to give it a lift, a zing: to keep the wine alive and us interested in another glass.  This life-giver is acidity.  And the producers here understand it.

So, we have a lightly fizzy wine – it can’t be above 2.5 bar pressure in the bottle – of modest alcohol, with sweetness and acidity in harmony, and a lightness of touch from the wonderfully aromatic Moscato grape.  Pair it with something brunchy (no, it’s not a typo…) and you have the sweetness of the wine complementing the saltiness of your food, while the acidity of the Moscato d’Asti cuts through the grease, fat, oil, butter.  And it’s no stronger than a beer.  Here are a few producers to look out for: Gianni Doglia – small Moscato specialist making serious Moscato d’Asti; La Caudrina; Saracco; Ca’ del Baio; Dante Rivetti; Francone; La Spinetta; Marchesi di Grésy; Pelissero; Rapalino; G. D. Vajra; Deltetto; Demarie; among many others – my apologies if I have left you out…!

Then we have all the whites, reds and sweeties of the region, but we can tackle them in other blog posts.

Right, next one will probably be about the vineyards – much has happened since I last mentioned them, so we can take a look…

For now, it’s off to cook a risotto: well, you can’t go out for foie gras every night.  (I told you this was going to be an even-more-than-usually-insufferable post…)