The Wagner effect- a game of two halves

Wagner has never really done it for me and I have been able to get along very well without him but in the past week he appeared, uninvited,  in my life. You may already be wondering the relevance of Wagner to life in Italy and until last week I wouldn’t have been able to explain. I suppose one of his operas may have played at La Scala but is that enough to name a metro station after him when there are a host of better qualified Italian composers or tenors?

I was acting as chauffeur and unofficial tour guide to some visiting non- Italian speaking friends and avid Tottenham supporters, who had kindly invited me to the Champions League match at the San Siro to watch Inter Milan v Spurs in return for a bed for a couple of nights. Exciting stuff having never watched Spurs outside the UK in the 50 odd years I have been a fan. I researched the journey, and for anyone visiting Milan here is an excellent tip: don’t drive into the town centre but exit the A7 autostrada at Famagosta. There is a multi-storey car park with the Metro station on the ground floor and for the princely sum of €3 you can go anywhere on the network all day. 20 minutes later and we emerged from the steps into the Piazz del Duomo for a spot of sightseeing before the match and I must admit that I was totally unprepared for the welcome that awaited us: a sea of chanting, boozing but reasonably well behaved “yids”. 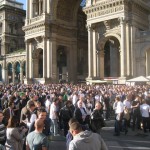 "Yids" on tour in Milan 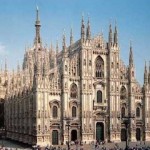 Il Duomo Milan on a non-matchday

Somewhat incongruous that they should be there, next to the historic Roman Catholic Cathedral rather than seeking out the local synagogue. Nevertheless it was all very good humoured and a rather  exciting prelude to the game. Anyway, after a gentle stroll and a bottle of Sicilian Rosso in a local bar we set off for the stadium and here is another useful tip: when using a metro line that forks, make sure you read the destination on the front of the train. I didn’t and after a few minutes as we entered Wagner station my companions managed to read the sign and asked whether we were on the right train, their first and only contribution to the travel arrangements. Embarrassment on my part as we leapt off and for the rest of the evening they ungratefully called me Wagner (and since). As you know, it got worse. 3-0 down after 14 minutes, down to 10 men and a 4th added before half-time. By that time I was ready to leave as we had a couple of hours journey time home. They fortunately ignored me and we were rewarded with probably the most exciting hat-trick  in the history of the Champions League and it felt as we left the ground that Spurs had actually won. With Weder Bremen and Twente only managing a draw, qualifying for the knock-out stages looks a strong possibility. Come on you Spurs!

My new namesake cropped up again at the weekend. I think the level of performance in this year’s X-Factor is very high but can anyone explain to me how Wagner stays in the competition? Actually perhaps Stephen Fry can…..