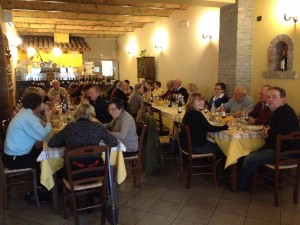 Sunday lunch at I due Regni

Around Easter it seems to be one set menu after another which is a good opportunity to support local restaurants that are not necessarily regular haunts. Recently for example we booked at “i due Regni” a local pizzeria that was offering a set lunch and were blown away by the quality of the food, wine, service and company! Just 2 long tables and we were the only non Piemontese. As usual, although we didn’t know anybody apart from the staff, they knew about us and where we lived. We were seated with an 86 year old wine producer and his wife of 60 years , the President of the local Truffle Association and other smiley locals. We had drunk and enjoyed his wine in a local bar: (Cantina Parroco Azienda San Michele) originally founded by the Parish priest and some friends 40 years ago. Whoever says or thinks that the Piemontese are “closed” must have been lost. €30 provided 8 courses including suckling pig, rabbit in Barbaresco and wine.

2 words from the mayor

The commune in Coazzolo also put on a top programme recently that included a tasting of 78 local Barberas in the cellars of the castle followed by a lively dinner in Ca ‘d Linet assisted by  their neighbour Osteria dell’Asilo. Both restaurants have fixed menus around €30 for six courses or so. Great fun with accordion music and singing and excellent food including a fantastic sweet and sour rabbit. The speeches went on a bit however. Ironically, local “faces” were asked whether they would like to say “due Parole” (2 words)  and after an initial refusal produced notes and patently couldn’t count.

This preceded what is always the best Festa of the year, “di Cortile in Cortile”. Castagnole delle Lanze throws open all its courtyards and the village comes to life with food stalls, music (everything from Jazz, Rock to local Apini and disco) and of course Barbera for which it is famous. This is one date that should go in your

diary every year , the first weekend in May!

i Cortile in Cortile

Fiore di Pesco in Bricco di Neive is another place which is always great value and for a similar price includes Cinzia’s wine throughout. Thirteen of us recently had a fantastic Sunday lunch in a separate private room and the food just kept coming (no menu).

Special fish menus at  Crota ‘d Calos in Calosso and La Contea in Neive were terrific. La Contea’s costing rather more (€60) but included Maine lobster, champagne and their excellent Barbaresco. They also now have a simplified cheaper lunch menu. A similar higher-end menu is offered at the Michelin starred Il Castello di Grinzane Cavour where a dozen of us dined recently for €60 per head for 5 courses including decent Nebbiolo. It’s the only place I know where they serve a pre-dessert dessert amongst their other “amuse bouche”.

It’s difficult to know where to go to eat as there are so many good restaurants to choose from and to make matters worse we are always getting recommendations. We have decided to try a new restaurant every 6 weeks or so or revisit places we haven’t been to for a while. Our last attempt  yielded a class Piemontese experience at Garibaldi in Cisterna d’Asti. Classic Piemontese Cucina and wine. A friday night re-aquaintance with Il Risorgimento in Treiso was notable for their wonderful Tajarin with a rabbit sauce and fantastic salt cod with olives, potatoes and tomatoes. We won’t leave it so long.

Last  week we embarked on the second Bararesco a Tavola at La Torre del Monastero. Fixed menu, 19 of the new 2010 Barbarescos and fortunately not a “fast day” our antidote 2 days a week. Also a great place to view the Giro d’Italia from! 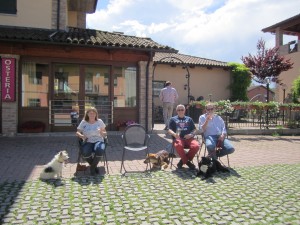 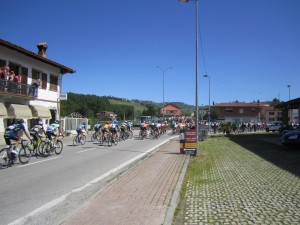