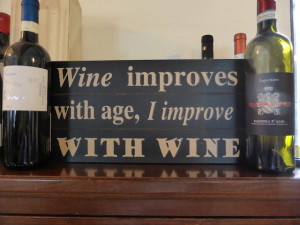 A month into 2014 and I’m already struggling with New Year’s resolutions. I promised myself that I would blog more often but with lots of visitors and consequent adventures I’ve kept putting it off. So I’m going to start with this week and work backwards. I recently got back in touch with Andrew (and wife Roz) a business friend of 30 odd years whose daughter and husband have a ski chalet business in Bardonecchia (Sempreski) where they spend around 6 months of the year. It’s only a couple of hours drive from Neive and like most of our friends once they discover our local wines they can’t stay away.  They will be welcome regular visitors as apart from loving the wine they also play  golf  and bridge.  They were here last week and in between rubbers we managed a couple of tastings.

We hadn’t seen Claudio Rapalino for some time but bumped into him in town a couple of weeks ago and promised a visit to catch up on vintages etc.  As is usual an hour turned into 3, the only downside being that his 2012 Favorita was unsurprisingly sold out and the 2013 was yet to be bottled. Tasting it from the vat confirmed our general opinion and we will return in April or pre-order in March. Despite the length of our stay we didn’t get as far as the Barbareschi as he makes a few other red wines that made us linger.  The  latest addition is a pinot noir,  (Pinò Néir in Piemontese) 2009, his first vintage. It’s nice to have something different in the rack but this is a wine to hide away for a few more years (unlikely!). It has a real presence after a couple of years in large oak  but it is still adolescent. Dark cherries, tannic and I will have to check its progress regularly. 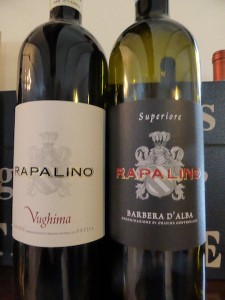 It was also good to update the progress of the 2006 and 2007 Freisa without opening them at home: I love this wine and appreciated the opportunity to top up. 2007 is the last vintage from their 60+ year old vines  which were dug up  a few years ago and replaced. The next vintage (from the new) will be 2011 and bottled later this year. Freisa, a close relative to Nebbiolo, went out of fashion some time ago when the locals found that they could get more money from Moscato which likes the same type of soil. Dad said “no” to replanting with Moscato, “let’s see” or Vughima in Piemontese which is what the wine is called. I think it’s worth at least 2 or 3 times the price of Moscato and you could be forgiven for thinking it a Barolo.  Dark fruit, soft lingering tannins and chewable length. When I go to taste the new offering I will probably buy any 2006 or 7’s that’s left. Last but not least was the excellent Barbera d’Alba Superiore 2009. I taste a lot of Barberas with a wide variety of styles and we have lots of “favourites” but I think this has arguably the most elegance of those recently tasted. Never rushed to market, the 2009 is the latest available vintage and a tad expensive but Claudio does what I should do with more of my wines, be patient. Seductive.

We also popped over to Sciorio, a regular stop, and similarly some wines are regularly sold out. In this case no Sauvignon Blanc or Barbera d’Asti “Beneficio”. However we did nab the last 2 dozen Chardonnay Prasca. Closely followed, into the back of the car by the Sciorio, Barbera 2011 and the “Furmjiah” Syrah 2010. I couldn’t remember whether I had those vintages at home or not but Andrew and Roz were Sciorio virgins so their buying decision was easy.

They also took away a 10litre box of Barbera to try out as a house wine in Bardonnechia; lucky skiers. A very pleasant couple of hours spent with Mauro usually the quieter brother.