How To Get To The Langhe

Right, so you’ve taken the deep breath.  Now it’s time for the plunge: you’re going to Piemonte…You will probably need to know how to get to the Langhe, Roero and Monferrato if you want to visit Barolo & Barbaresco!

Flying is probably the transport option of choice for most people reading this.  So without further ado, let’s look at how to get to Piemonte by air:

Piemonte’s main airport is Turin/Torino Caselle.  It is not a big airport, but it has good direct European flights and connections globally.  Apart from Morocco and Israel, its only current direct flights are within Europe: not only major airports such as Munich, London, Paris and Madrid, and smaller ones such as Edinburgh, Valencia and so on.  Here’s the link to Turin airport’s General Timetable page.

If you are flying from outside Europe, then you’ll likely have a connection at one of the major airports listed above, or Frankfurt or Amsterdam, to arrive at Turin.

From Caselle, the Langhe is around 75 – 90 minutes by road, the Roero an hour or so.

A little further, but not much longer in time, is Milan Malpensa.  This is the major international airport in northern Italy, with direct flights to North & South America and Asia. 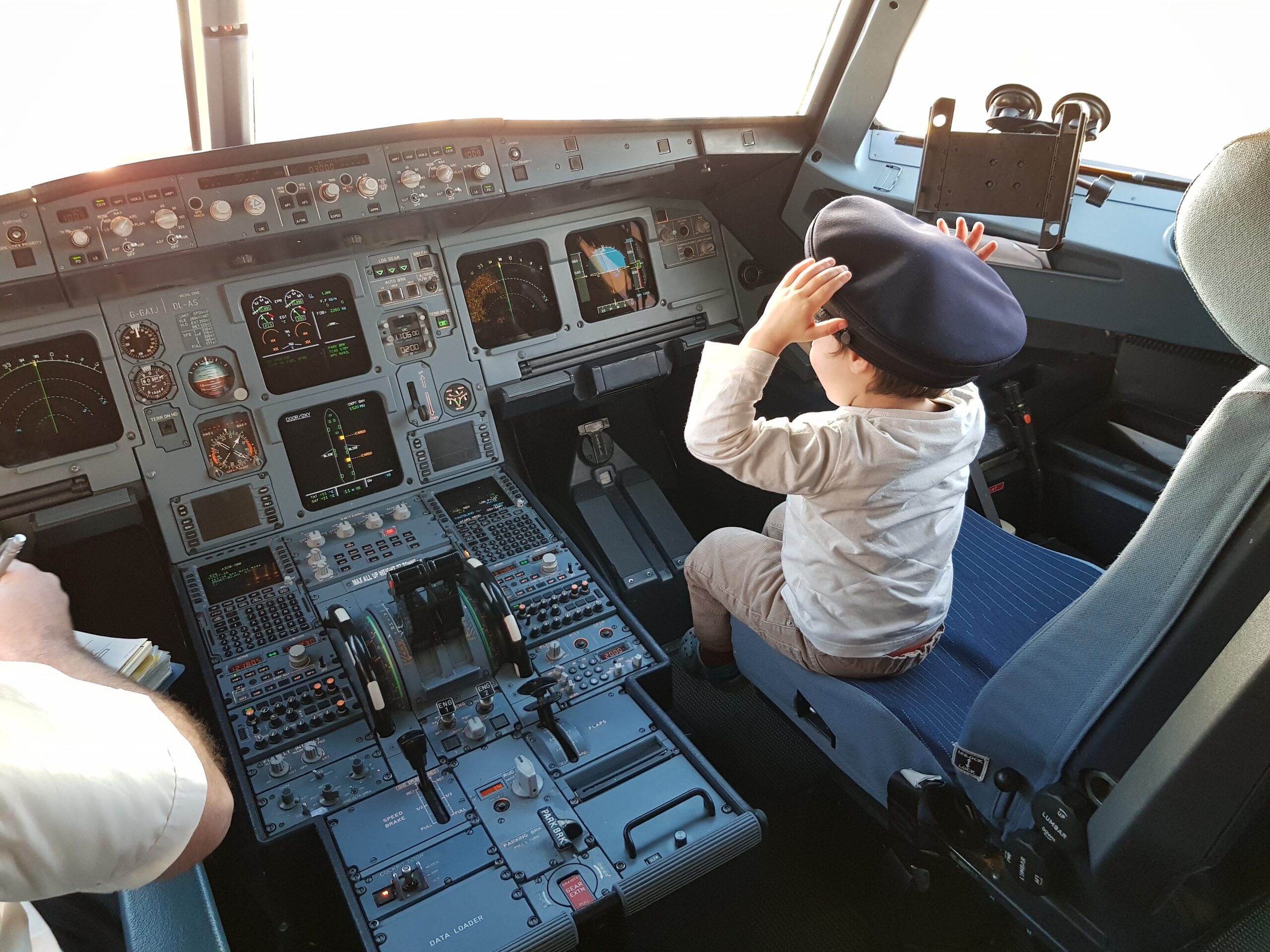 Getting to the Langhe from Malpensa is 90 minutes to 2 hours by car.

Milan is also served by Linate and, apparently, Orio al Serio-Bergamo.  Linate takes about the same time by car as Malpensa, while Orio al Serio is around 2.5 hours by car.

Being a smaller, ‘regional’ airport, Orio al Serio has plenty of low-cost, no-frills flights from smaller European cities.  If you go down that route, then I would definitely recommend a night or two in Bergamo itself – the old town up the funicular on the hill is delightful and was reckoned by Stendhal to be the loveliest in Italy.

Genoa/Genova also has an international airport, similar to that of Bergamo.  Again, it is well served by the low-cost airlines, and is around 2 hours from Alba by car.  If you are based in Genoa for a few days, then there is a quick and easy train to Asti which takes less than 90 minutes and is not expensive.  I can meet you at the station in Asti if you would like to do a day-trip.

Nice, France is about 3 hours away.  This is obviously starting to get a little far, but the compensation here is that you get to drive along the French Riviera and its Ligurian neighbour.  As with Bergamo, an overnight somewhere along the way probably wouldn’t do you any harm…

Geneva is about 4 hours by car.  Again, you’ve got some nice driving, but this might be just beyond the sphere of practicality, where Nice might be just within it.  Especially if you factor-in the Côte d’Azure…

If you’re flying in further south – which probably means Rome – then getting here by car is long: 7 hours or thereabouts.  So why not fly instead?

Ryanair flies from Rome to Cuneo-Levaldigi airport and it’s about 80 minutes.  From there, Alba is under an hour away, Barolo about 40 minutes by car.  Rome to Turin by air is also well served, but the drive from Turin-Caselle is further of course. 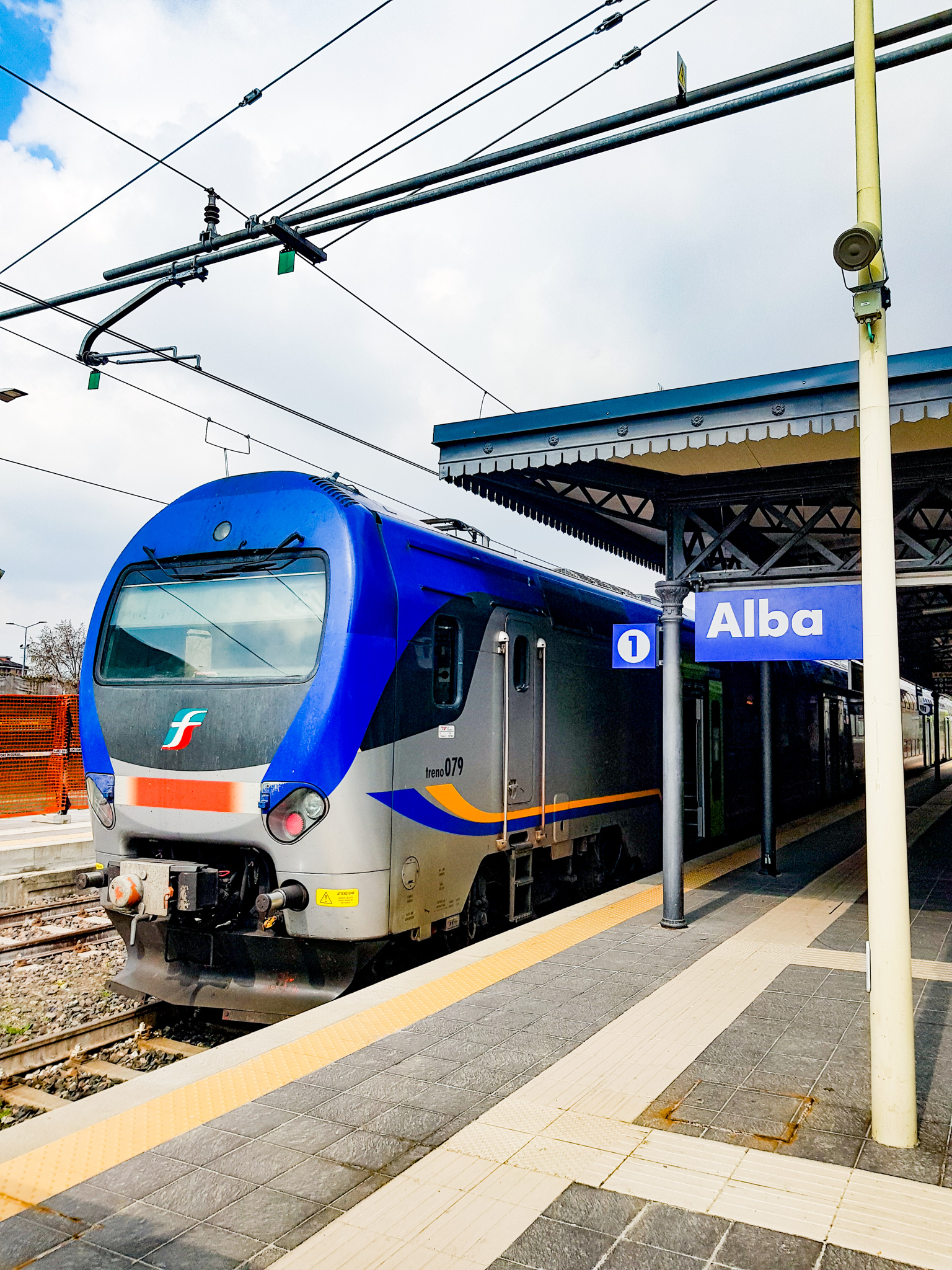 The Italian rail service is run by Trenitalia.

Alba from Turin is about 70 minutes by train, and there are direct trains from Lingotto.  Be aware, though, that if you plan to get to Lingotto rail station by the metro, Lingotto metro stop is not connected to the rails station: you will need to take a 10 minute bus ride to get to the station you can see just the other side of the building…There’s nothing like city planning.  And that’s nothing like city planning.

If you are flying in to Turin, then you can take a shuttle bus or a train from Turin Airport to Porta Nuova station in Turin.  The To Move section on the Turin Airport homepage has by bus and by train links for how to get from the airport into Turin.  From Porta Nuova the train to Alba is just under 90 minutes, with a change at Carmagnola or Lingotto.

Turin Porta Nuova to Bra – the capital of the Roero – is an hour with a change at Lingotto, Carmagnola or Cavallermaggiore.

It may seem a little daunting, but it’s quite simple in practice.  And I can help you with that stuff if you need.

Again, you could do a night or two in Bra – it’s a vibrant town, home to the University of Gastronomic Sciences and Slow Food, with a nice old centre and good food and drink options as you would expect.  Then hop on the train the next day for Alba: it’s 20 mintues and the station in Alba is a 2 minute walk from the centre of the town.

Milan to Alba is between 2.75 hours and 3.75 hours depending upon service and price.  Fast or slow, they all go to Turin first, then to Alba on the route described above.  If you’re doing that, then why not take the opportunity to visit Turin – here are some things that it has to offer…

Milan to Asti is anywhere from 2 hours to 3 hours, again the price varies with the service.

As mentioned, Genoa to Asti is from 65 minutes to 90 depending on the train, and I can meet you in Asti.

Genoa to Alba – This service is basically the Genoa-Asti service with the addition of a bus service from Asti to Alba which adds in the region of an hour onto the above Genoa-Asti time.

From Rome down, I’d fly…especially given that I found a return ticket to Catanina, Sicily in March 2022 for €12 (yes, €12 – there is not a ‘0’ missing).  That was ‘pack a toothbrush’ style, but even checking-in luggage, it would be way cheaper and quicker to fly.

Trenitalia has introduced a new Paris-Turin service that is high-speed and undercuts SNCF, the French alternative.  Both are around 5.5 hours and neither has to be expensive – one-way on Trenitalia starts at €39, on SNCF €69, though both may offer some even cheaper tickets periodically.

Cities such as Turin, Milan and Genoa are also well-served by international services from France, Spain, Portugal, Switzerland, Germany, Austria on so on.  If you are arriving by train from one of these, or other European countries, check the national rail provider of the country from which you are travelling for details.  Most, if not all, have English websites.  There is also Rome2Rio, which seems pretty good to me, with the caveat that I have not planned a European trip using it. 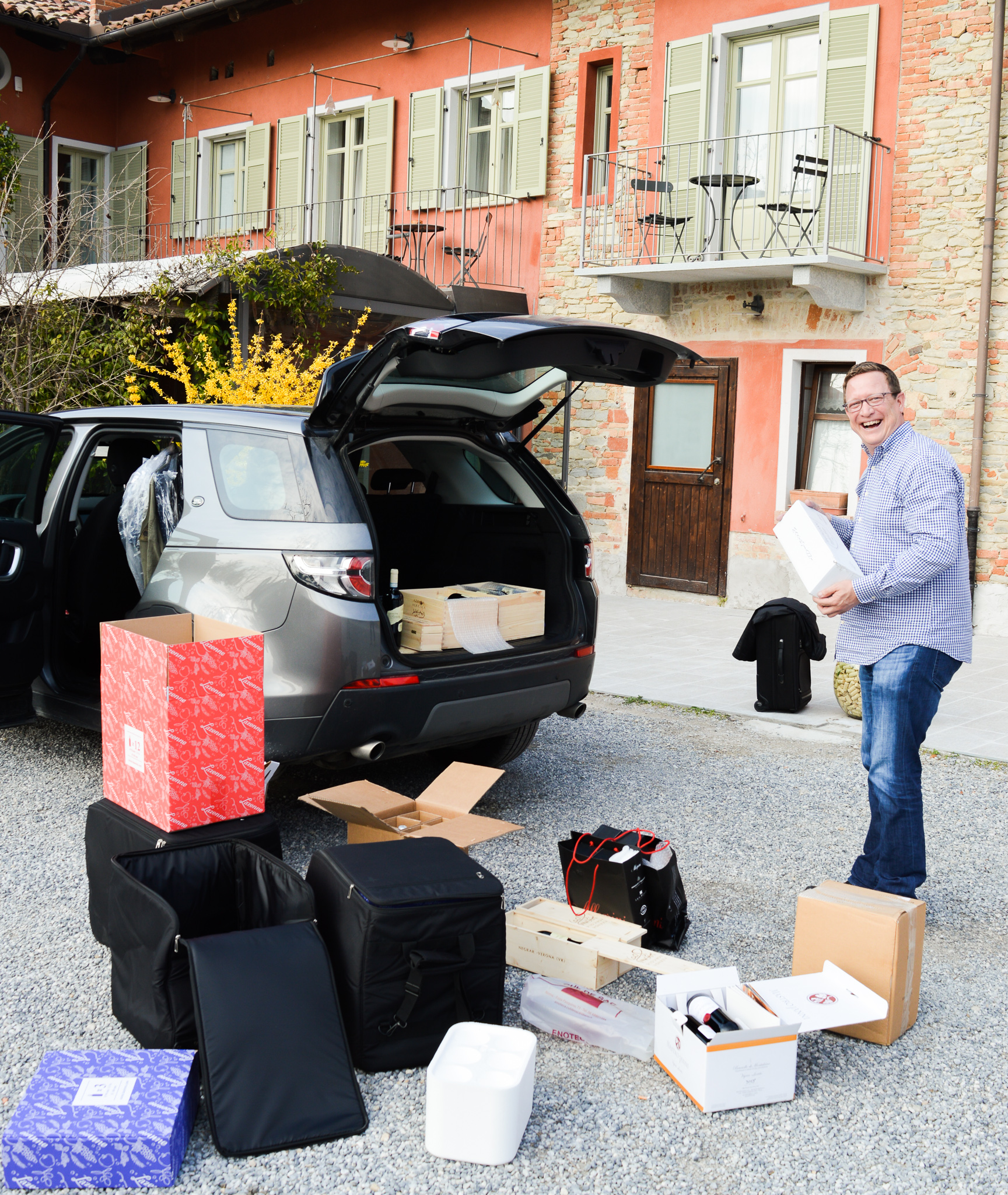 You are likely to be arriving in the Langhe, Roero or Monferrato initially via the autostrade – the highways.

From France, depending on where you are travelling from, you’ll come in via Frejus Tunnel, Bardonecchia and Turin, before heading down on the A6 Torino-Genova Highway.  Get off at Carmagnola and head for Alba, or stay on the A6, getting off at Marene.  You might take the Geneva route, through the Mont Blanc Tunnel, via Aosta and Ivrea, before Turin and the route outlined above.

Coming from further south in France, you’d take the coast road, the A8, crossing from France into Italy at Ventimiglia and continuing on to Savona, taking the A6, or to Genoa and taking the A26.

Coming from further south in Italy, you can either do the coastal autostrada, the A12, and head inland at the A7 at Genoa, or the A26 just after Genoa, or you can take the Apennine autostrada, the A1, and then turn onto the A21 at Piacenza and the A33 at Asti.  From Florence, for example, you could take either of these routes and arrive in much the same time.

From north-eastern Italy, you’re likely to need the A4 at some point – it links Turin to Trieste on the Slovenian border.  Probably your best bet is then the A21 at Brescia so that you avoid skirting Milan.

Zurich is a bit over 5 hours (depending upon your vehicle…) using the A2 via Como, the A7 at Milan and the A21 at Tortona.  Get onto the A33 at Asti.

Munich brings you the same way once you’re in Italy.  Innsbruck brings you in on the A22 passing Vipiteno, Bolzano and Trento (terrific sparkling wine up here), before joining the A4 at Verona.

Vienna would have you entering Italy on the A23, past Udine then onto the A4 at Palmanova.

After that you’re on your own.  As I say, there’s Rome2Rio or Google Maps or Via Michelin.  The Michelin one gives you the option of typing in your vehicle so it can calculate rough fuel prices and it gives you the toll prices as well for each option it lists.  Useful.

If you don’t fancy driving yourself, you can also hire drivers.  Europe Shuttle have offices all over Europe.  Here in the Langhe, we use Giacosa – they are very professional, friendly and have a great fleet of vehicles.

Ok, so you can’t really get all the way here by boat – but then you couldn’t really fly in, unless you charter a helicopter when you arrive and land somewhere in the Langhe, Roero or Monferrato.  Or a hot air balloon…

Anyway, the point is that you can sail into ports in Liguria, Tuscany or southern France, but you’ll still need to get here via land or, less probably, air.  Genoa is the largest, busiest passenger port in Italy.  Savona also takes boats.  Then there are all the smaller places to stop.  To get from them to Alba, for example, follow the road directions.

I think that’s it – there is no subterranean travel option, so we’re done.

Now that you know how to get here, you have no excuse – come to visit Piemonte, and get in touch with me to find out all about food and wine tours of the region!

Find Out More About Tours 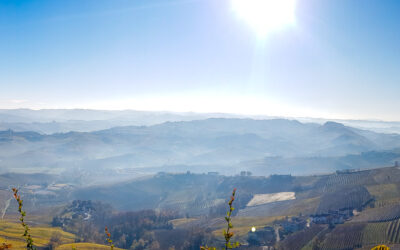 Dreaming of your next overseas trip

Looking for inspiration...?If you happened upon my previous blog post, you will know it contained season's greetings for Christmas & New Year.  But they feel long gone now and your holiday is over.  So you’ll be wanting some inspiration to keep you going through...

Season's Greetings, Merry Christmas & Happy New year!As ever, the autumn saw us busy in the Langhe – harvest may have come and gone by the time autumn arrived this year, but we still had plenty of visitors wanting to see the wines being made and sit down with a... 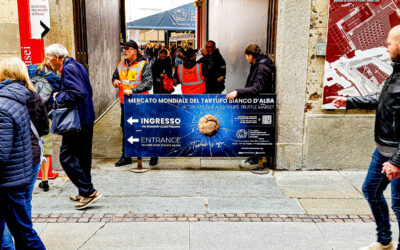 Something for the weekend, sir...?Yes, it's that time again.  Every year, as October swings around, we gird our loins and prepare for the swarming hordes to descend on Alba for the International Alba White Truffle Fair.  Well, last year and the year before we didn’t,...